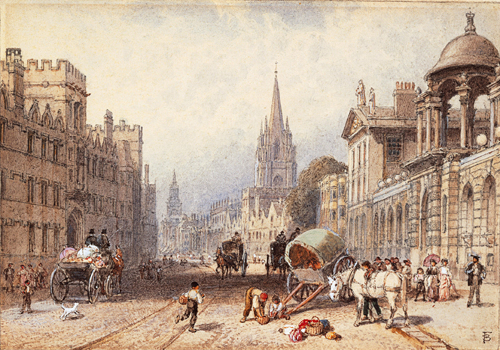 From town to gown, Oxford has a history both of artistic and academic merit, and of surprising turbulence, as Nell Darby explores.

The city of dreaming spires, Oxford is a beautiful yet compact city. From the circular architecture of the Radcliffe Camera and the Sheldonian theatre, to the pastel-coloured houses on the High Street, there is history everywhere you look.

Oxford is best-known for its collegiate university, which dates back to at least the 12th century; but there are several sites in the city that are associated with the university’s more unusual history. For example, Old Tom is the name given to the Christ Church Cathedral bell, which strikes 101 times just after 9pm each night. This used to be curfew time for university students, and so the bell would originally ring to warn them that they had to return to their colleges.

But the university’s presence has caused some conflict. In February 1355, a fight broke out between Oxford residents and students. The former attacked the students, leaving over 60 of them dead. It was a symbol of the tension that could be caused between ‘town’ and ‘gown’, and became known as St Scholastica’s Day. Every year on its anniversary, until 1825, the city’s mayor had to pay a penny to the university for every man killed, and attend a mass for their souls. This practice only ended when the mayor one year refused to take part.

Oxford’s Broad Street was the location for a violent and tragic part of the city’s history. In 1555 and 1556, three bishops – Latimer, Ridley and Cranmer, remembered as the Oxford Martyrs – were burnt at the stake for heresy. Their deaths were part of Bloody Mary’s persecution of protestant dissenters under her brief Catholic reign. A century later, Oxford became England’s capital after Charles I relocated parliament here during the English Civil War. Again, there was a split in support by town and gown, with the town supporting Cromwell’s cause, whilst the university supported the monarch.

Heritage and the arts

Oxford has been home to museums for centuries. The first museum ever to open to the public was the Ashmolean Museum, which opened in 1683. Some 40 years prior to its public opening, the museum was given Guy Fawkes’ lantern by Robert Heywood, whose magistrate father had been present when Fawkes was arrested, following the Gunpowder Plot. In 1884, the Pitt Rivers, possibly the most unusual museum in Oxford, opened. It was named for General Augustus Henry Lane Fox Pitt Rivers, a soldier, and amateur archaeologist and anthropologist, who donated his collection of 26,000 ethnographic objects to the university. The collection came from all over the world, and took some 30 years to accumulate. There are also university museums of natural history and the history of science.

Oxford is home to several theatres, but some have a surprisingly short history. One of the older ones is the New Theatre, although the one that exists today is not the original – although it is the same location. The original New Theatre opened on the corner of George Street in 1836, and offered music hall style entertainment. It was usually known as the Vic, or the Theatre Royale – taking the name of the theatrical company that performed there. The type of entertainment put on there was a necessary result of the terms of the lease; the theatre was unable to put on any plays during the university’s term time, and so concerts or other entertainment had to be performed instead. The original building was replaced in 1886 and enlarged in 1908; the present building on George Street only dates from 1933.

As an ancient seat of learning, it is not surprising that Oxford also has a history of book-loving. In 1478, two years after William Caxton established the first English printing press, the first book was printed in Oxford. The university has its own press, the Oxford University Press, which opened its first overseas office, in New York, in 1896. The Oxford bookshop Blackwell’s was established by Benjamin Henry Blackwell in 1879. His father, Benjamin Harris Blackwell, was a librarian, and his son was originally a bookseller’s apprentice. He opened his first shop at 50 Broad Street, and it steadily expanded.

The most famous place for books in Oxford is, of course, the Bodleian – the university’s main research library. It first opened in November 1602 and today, both students and non-students can use its resources. The Bodleian’s librarians have tended to work at the library for some time – the 19th century, for example, saw only four men take on the role.  One of them, Bulkeley Bandinel, obtained his BA from the university in 1800, and became under-librarian at the Bodleian in 1810, before taking on the position of librarian in 1813. He continued as librarian until his death in 1861.

Also in Victorian times, Oxford and the surrounding county was home to pioneering photographers such as Frank Packer. Another was Edward Bracher, a native of Salisbury, who married the sister of one of the Bodleian’s assistant librarians. Bracher set up shop on the High, at number 26, becoming one of the city’s earliest portrait photographers. In 1856, Bracher took on 14-year-old Henry Taunt as an assistant; 12 years later, Taunt set up his own business, initially at Broad Street, then at 41 High Street, and, from 1895 until 1906, at 34 High Street. Taunt became a highly successful landscape photographer, and produced the first illustrated guide to the Thames that used photographs.

Before the café, came the coffee house – which most people associate, perhaps, with London. Yet it was in Oxford that one of the first English coffee houses was established by the mid-17th century. Located on the High, Samuel Pepys mentioned the place as Jacob’s coffee house in his diary. Today, there is still a café on the site at number 84 – the Grand Café, a grand establishment offering cream and high teas rather than coffee and a pipe. Oxford’s visitors come to the city for education, history, art… but also for some gossip over a coffee, and we share much with our ancestors in this respect.

History and heritage in Oxford