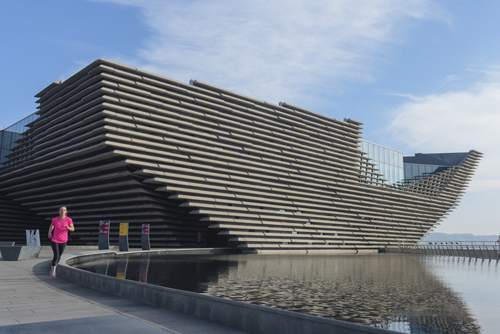 V&A Dundee has welcomed half a million visitors to the museum since it opened, hitting the milestone almost six months earlier than expected.

The 500,000th person to walk through the doors of Scotland’s first design museum was officially recorded at 10.35 on Saturday 30 March.

V&A Dundee, which opened on 15 September last year, has vastly exceeded original visitor estimates which forecast it would take 12 months to reach half a million visitors.

People from Dundee, Scotland and all over the world have enjoyed V&A Dundee’s programme of exhibitions and events as well as the remarkable museum building, designed by Japanese architect Kengo Kuma.

Surveys commissioned by V&A Dundee have found that visitors are being attracted from beyond the immediate Tayside region, with 36% from elsewhere in Scotland, 17% from the rest of the UK and 9% from overseas.

Survey responses also show the opening of V&A Dundee has given its home city new confidence, with 84% of attendees saying the launch festival positively impacted their perception of Dundee.