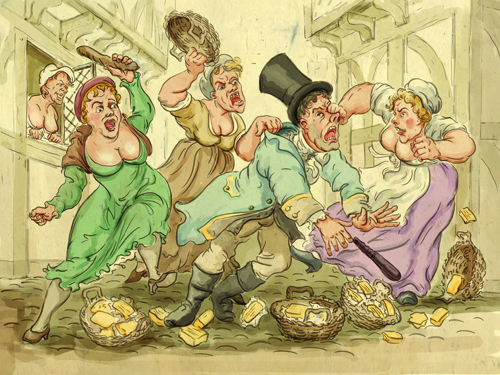 The Riot Act came into effect in England on 1 August 1715, a response to a series of civil disturbances that had taken place across England over the previous five years, it was intended to introduce a quicker way of punishing rioters and “riotous assemblies”. The act made it illegal for 12 or more people to “unlawfully assemble and disturb the public peace”. They now had to disperse within an hour of being read a specified portion of the act, or be considered guilty of felony. But riots were a way for the poor to make public their complaints – vital in an age where they were disenfranchised. Food prices were a frequent cause of riot and in 1800, for example, a disturbance took place in Ipswich’s market place. Some local women took offence at butter being priced high. They seized the butter, before trying to dispose of a cartload of flour. One local magistrate stood on the cart to try and get them to stop, but by the evening, groups of women were seen breaking bakers’ windows and ringing bells.

Problems continued for the rest of the weekend and, on Monday, a group of men and women took over a local mill and refused to leave until the flour was sold to them at 2s 6d a stone. Magistrates, constables and the Loyal Ipswich Volunteers made their way to the mill and cleared the women, but then became aware of “a vast number of men upon the bridge”. Horse troops were called, and the Riot Act was now read. The crowd panicked, and some ran and fell into the mill river while others fell into neighbouring tan vats. Although the needs of the poorer members of the community were recognised, rioting was seen as the wrong way to air issues such as food prices – for market traders might now refuse to come with their produce for fear of “losing it, and being insulted, if not ill-treated, by an infuriated and misguided populace”. A detachment of dragoons was kept in readiness the whole of the following week, in case of any further riots.