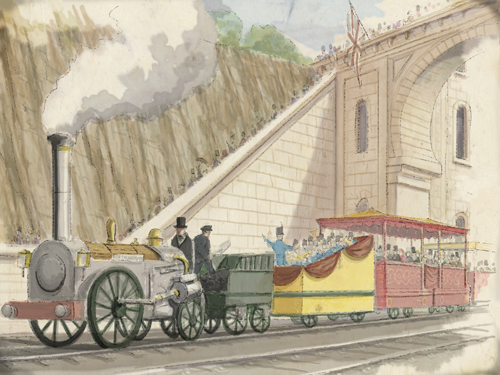 It was on 15 September 1830 that the first locomotive-hauled railway to connect two cities opened. The Prime Minister, Arthur Wellesley, Duke of Wellington, rode on the first of eight inaugural trains from Liverpool, travelling 35 miles to Manchester. The Duke’s train ran on one track, while the seven others made the journey on a parallel track. Although the journeys started smoothly, 13 miles out of Liverpool, one of the other trains derailed. Luckily, there were no injuries to passengers, the derailed locomotive was lifted back onto the track, and the day continued.

At the halfway point, Parkside Station, the trains stopped to take on water. Liverpool MP William Huskisson got off his train to go and talk to the Duke of Wellington on his train. However, he failed to realise, until too late, that another locomotive was approaching on the next track. As he desperately tried to climb into the Duke’s carriage, the door swung open, taking Huskesson with it. He fell on to the tracks in front of the train, and died later that day from his injuries.

Large crowds had gathered in Manchester to see the trains, and the local authories were worried that they were becoming hostile at the delays. It was decided to continue the journey, but by the time they arrived, the crowd had had enough. Wellington was pelted with vegetables, and demanded to be taken back to Liverpool. Mechanical failures and an inability to turn the locomotives round left four of them unusable. Yet despite this rather disastrous opening day, the possibilities offered by cheap and quick travel meant that the L&M railway became a rapid success.