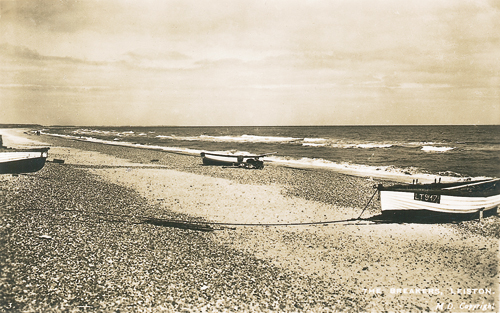 Dee Dent’s research into her family’s history has thrown light on how the arrival of modern industrial manufacturing transformed life in Victorian Suffolk.

A pony and trap hired from the local pub, a picnic basket, and her much-loved grandfather at the reins. My mother had a perfect summer holiday when she and her younger brother went with her grandparents from their home in Leiston, a small town in Suffolk, across the common to the local beach at Sizewell. It was a wild pebble beach with the chilly North Sea to wander beside and paddle in. A few fishing boats were hauled up on the shore – some huts and sheds were the only things to be seen on the lonely beach. Now, though, it is home to the Sizewell nuclear power stations.

I visited that beach a few years ago – I was exploring my mother’s family history as part of my favourite hobby of family history research. I took with me two photos of what had been a bleak, lonely scene over 100 years earlier, from postcards I had found amongst my mother’s papers. The change could not be more startling – or poignant.

What had changed little, however, was my great-grandparents’ home in Eastward Ho, Leiston. The same sedate Edwardian houses, although with the addition of some telegraph poles and television aerials – and a great many cars – but basically, over a century had passed without much trace. One of the postcards, from October 1907, to a little girl of six named Queenie (my mother, Alexandra) is almost illegible, but seems to have been from her grandmother.

My great-grandparents, Kemuel and Eleanor Lincoln, lived in Leiston for over 40 years. In many ways, their lives epitomise the changing world of Victorian England.  Kemuel was the eldest son of an agricultural labourer. He was born in 1832 in the tiny south Suffolk village of Hollesley, which was both near the coast, but also very near some mysterious mounds – these were later found to be ship-burial mounds of early East Anglian kings, and remain world-famous as the site of the Sutton Hoo treasure.

Kemuel was trained as a wheelwright, married the daughter of a master carpenter -probably the man to whom he had been apprenticed. He would have been a wheelwright in a south Suffolk village for the rest of his life had the world had not been changing so rapidly. The 1891 census records that Kemuel Lincoln had ceased to be a wheelwright; he had become a ‘machinist’ when he moved to nearby Leiston in 1871 with his second wife, Eleanor (nee Wright), and their three children. Kemuel’s first wife, Laura, had died of ‘disease of Lungs’ soon after the birth of their only child, Douglas.

Kemuel was now almost certainly working for Richard Garrett & Sons of Leiston, who employed over 2000 people in a rapidly expanding business manufacturing agricultural machinery and steam engines. They were one of the earliest users of flow line production, an early form of assembly line (after Richard Garrett III saw this American invention demonstrated at the Great Exhibition of 1851), and the workshop built for this purpose can still be seen at Leiston. It is now known as the Long Shop Museum, and features a reconstruction of that early assembly line.

Garrett’s had moved from nearby Woodbridge, where they had been running a blacksmith’s, in 1778, and the great expansion of their business was a major factor in Leiston’s transformation. The town’s population, of just over 1000, doubled between 1841 and 1871, and it doubled again between 1871 and 1921. The medieval parish church quickly became too small for the number of people wanting to be part of the congregation, resulting in it being extended in the fashionable Gothic Revival style during 1853-54. The graveyard had to be enlarged at the same time.

It seems that Kemuel became a factory worker, and his three sons joined him there as soon as they were old enough to start work. Despite this new world of industry, the Suffolk countryside still lay all around them. When Kemuel and Eleanor’s daughter Elizabeth, my grandmother, married and went to live in London, she still packed a trunk every summer and had it put in the guard’s van on the train that took her and her family back to Leiston for their summer holiday.

Visiting the parish church of St Margaret, where my grandmother was married in 1901, we found a touching reference to the Lincoln family. On three occasions in the late 1880s, a peal of bells (Bob Major and Oxford Treble Bob Major) was rung of sufficient length and importance to be commemorated on a board in the church. The bell ringers involved were listed – and one of them was my grandmother’s older brother – my great-uncle, Albert J Lincoln. My family’s past came to life in that beautiful dim church!

The Long Shop Museum is housed in part of the former works of Richard Garrett & Sons, which from the 1780s onwards manufactured all kinds of agricultural implements and machinery – including the steam engines for which the firm became famous. Garrett’s also made trolleybuses, while during World War 2, they switched to making 12pdr and Oerlikon guns for the Royal Navy and for coastal defence. An example of the former can be seen on display at the museum. The main museum building dates from the 1850s and is Grade II* listed; the displays it houses are contained in a central area and along the first-floor level galleries at either side. As with so much of British manufacturing, the works closed in the early 1980s. After this, much of the site was redeveloped for housing and offices, apart from the Long Shop itself, which was transformed into what is today a lively – and still expanding – museum. The Long Shop Museum is open from March to October, during which time there is also a full programme of special events.

In the museum you will find a staggering collection of objects, ranging from full-size steam engines (the Richard Garrett & Sons engineering business made many hundreds of steam engines here) to touching mementoes of the lives of the working people of the town. The Long Shop itself – at the heart of the museum – is a Grade II* listed engineering workshop, thought to be one of the earliest purpose-built production lines in existence (made long before Henry Ford had the same idea.), and it's chock-full of fascinating exhibits.