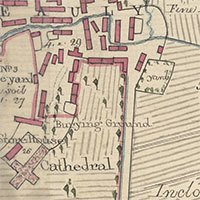 The National Library of Scotland has released more than 400 historic estate maps from Inverness-shire, Ross-shire and Cromartyshire online. The maps cover extensive areas west of Inverness, as far as Mallaig and Fort Augustus in the west and south, and range in date from the 1750s through to the 1960s. The earliest maps in the collection are by Peter May (1724/33-1795), working for the Commissioners for the Forfeited Annexed Estates, and his nephew George Brown, who trained under May. Later significant map-makers were John Boulton (1830-74) and David Gordon (fl. ca. 1840s-1890s). The maps depict all aspects of Highland estate management, including agricultural improvement, enclosure, drainage and embankments, the planning of settlements such as Beauly, the leasing of farms and grazings, the allocation of land for crofts, and land ownership disputes. The construction of new roads, railways, and bridges, and their development over time is also well-represented. After Ordnance Survey mapped Inverness-shire (1866-76), OS maps were often annotated to show specific features relevant to the estate, whilst fresh maps were also drafted to show new subjects, including the expansion of hunting and shooting runs, and the growth and management of woodland.