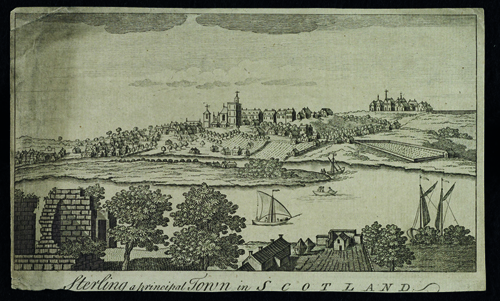 From Roman walls to battlefields, this central part of Scotland has a wealth of history to explore. By Nell Darby.

Stirlingshire, in the west midlands of Scotland, borders Perthshire to the north and Lanarkshire to the south. The county town of Stirling was one of the principal royal strongholds of the Scottish kingdom, and was created a Royal burgh by David I in 1130. Stirlingshire also includes Falkirk and Grangemouth, Bannockburn, and the Bridge of Allan – a diverse range of places each with its own fascinating history.

The Antonine Wall was built by the Romans in the 2nd century, from the Firth of Clyde to the Firth of Forth. Callendar House in Falkirk lies on what would have been part of the wall. The Antonine Wall was the most northern frontier barrier of the Roman Empire, and was 39 miles long, made of turf with possibly a wooden palisade on top. Construction began under Emperor Antoninus Pius, and it took around 12 years to complete – but it was abandoned within a decade. Garrisons located here – the soldiers manning 16 forts along its route – were sent back to the stone built Hadrian’s Wall further south, and the Antonine Wall weathered away over time. However, some remains are still visible, and are now looked after by Historic Scotland.

Stirlingshire has long been associated with battles, and the fight for independence. In 1297, the Battle of Stirling Bridge saw Andrew Moray’s and William Wallace’s forces defeat English forces during the First War of Scottish Independence; a year later, the Battle of Falkirk saw Wallace in turn defeated by England’s Edward I. In June 1314, the Battle of Bannockburn saw a Scottish victory, and formed one of the main battles of the First War. It was over a century later, in June 1488, that the Battle of Sauchieburn took place two miles south of Stirling. This battle saw the forces of James III of Scotland fight the rebel Scottish nobles led by 15 year old Prince James, Duke of Rothesay. In 1645, the Battle of Kilsyth took place forming part of the Wars of the Three Kingdoms, where Covenanter and Royalist armies fought. Then, on 17 January 1746, the Battle of Falkirk Muir took place, seeing the Jacobites defeat a government army.

The county’s grand homes and castles are testament to its military and industrial past. Callendar House and Park in Falkirk, built in the style of a French Renaissance chateau, dates mainly from the 19th century, although at its heart is a 14th century tower house. Mary, Queen of Scots, Oliver Cromwell, Bonnie Prince Charlie and Queen Victoria have all visited here. Kinneil House, to the west of nearby Bo’ness, has, like Callendar House, part of the Antonine Wall running through its grounds. It is also famous as, in its grounds, are the remnants of a small house where James Watt worked on his steam engine.

As the mention of Watt might suggest, Stirlingshire has been home to a variety of industrial activity over the centuries. The county town of Stirling had a significant weaving industry over the 18th century, with wool and cotton both being woven. Carpets were also made in the town. The first bank in Stirling opened in 1777, and by the end of the century, there was a piped water supply for the wealthier residents. In 1887, Bartholomew’s Gazetteer noted that the area was home to “important manufactures of woollens, cotton and iron; and there are several chemical works and distilleries”.

In the 18th and 19th centuries, it was the Falkirk area that was the centre of the local iron and steel industry, with the Carron Company being based in the nearby village of Carron. This company made carronades for the Royal Navy, and also pillar boxes. The surrounding area was home to collieries such as those at Bo’ness, Kinnaird, Stoney Rigg and Redding. There was controversy in how the mines worked; from the start of the 17th century until the very end of the 18th, Scottish miners were the property of their employers – they were bonded labour and could be bought or sold like slaves. Those who tried to escape could be sent to prison (see tinyurl.com/pqywkyg for more information).

Bo’ness, as well as having a colliery, was also home to the Maidenpark Quarry – stone from which built the town hall. Its early 18th century harbour was added to by a dry dock in 1881, but the commercial port, which was used to carry coal, closed in the mid 20th century, mainly due to the decline in the Scottish mining industry. Grangemouth was founded in 1777, as a result of the construction of the Forth and Clyde Canal; when the canal finally opened in 1790, trade passed in and out of the new town via this waterway. In 1811, a dry dock was built to serve the local shipyard. Over the course of the 19th century, a new dock and further increases in dock capacity were carried out.

Falkirk Steeple was the town’s tollbooth and short-term gaol from 1697 until the late 18th century. In 1814, a new steeple was constructed – which still exists today on the High Street – with cells on its upper floors. 30 years later, in 1847, Stirling’s town jail was built, and in the 1850s, the town gained its own police force. An infirmary was also opened there in 1874, the same year that horse drawn trams also started to make their way through the town streets. The Victorians were concerned with preserving their health and avoiding the need to enter the infirmary. Therefore, it is not surprising that Bridge of Allan became a popular Victorian spa town, known as much for its restaurants and cafes as for the hydropathic therapies offered there. At the start of the Edwardian era, in 1902, the Bechelli family opened a café there, making and selling its own ice-creams – and the café continues to be run by the same family today, now in its fourth generation.