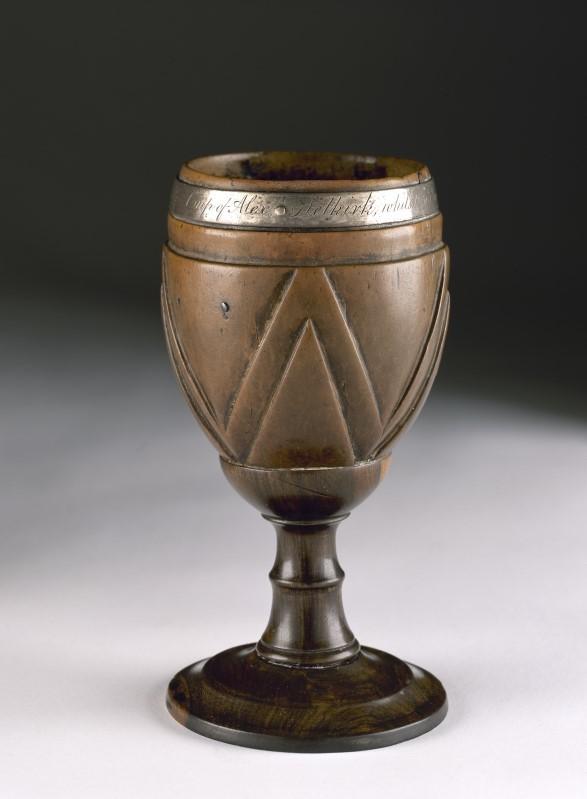 The drinking cup of the original Robinson Crusoe and a bridle used by Sir Walter Scott to ride his favourite pony are now on display at the author’s home, thanks to loans from National Museums Scotland.

Other new additions to the free exhibition, in Abbotsford’s Visitor Centre, include a fragment of curtain from Scott’s home in Edinburgh and a cherry wood carved tobacco pipe belonging to Scott, both from the collection of the National Museum of Scotland, plus an invitation to Scott’s funeral, with a lock of the writer’s hair, on loan from a private lender.

In exchange, several of Scott’s items have been loaned to the National Museum of Scotland, in Edinburgh, as part of its major Wild & Majestic: Romantic Visions of Scotland exhibition.

Abbotsford is also delighted to have secured an extended loan of an exquisite gold memorial locket, set with semi-precious stones, whose initials spell the author’s name as an acrostic, which was due to return to the private lender, but is now on display for another ten months.

Kirsty Archer-Thompson, Abbotsford’s Collections and Interpretation Manager, said: “We are delighted that the National Museum of Scotland has been able to lend us items that were either once personal belongings of Scott or things admired by him, allowing us to showcase these stories for local people to enjoy.”

“Scott had loved stories of shipwreck and survival since he was a child and he seized upon the opportunity to visit the birthplace of Alexander Selkirk, the real castaway who inspired Daniel Defoe’s Robinson Crusoe. He was shown some of the items salvaged from Selkirk’s time on the island, including the coconut cup we have on display. Scott was so impressed that he arranged for the coconut cup’s rim to be banded with silver, and for the addition of the rosewood stand.

“Other items, such as the pony bridle and Scott’s pipe are more personal to Scott, and give us a glimpse into his life. The funeral invitation also highlights how revered Scott was in his day, with locks of his hair kept as sentimental relics. William Paterson, one of the builders of Abbotsford and recipient of the invitation, appears to have acquired a generous amount!

“As part of our working relationship with the National Museum of Scotland, we have loaned the Museum items for its new exhibition Wild and Majestic: Romantic Visions of Scotland, which shows the pivotal role Scott had in popularising the defining images of the nation.”

Items loaned to the exhibition include the silver urn gifted to Scott by Lord Byron a pair of steel flintlock pistols by Macleod worn by Scott during the Royal Visit of 1822, a basket-hilted broadsword presented to Scott by the Celtic Society of Edinburgh in 1826 and a sword given to the Marquis of Montrose by King Charles I and worn by the Knight Marischall during the Royal Visit of 1822. (The Knight Marischall was effectively protector of the Honours of Scotland as they were moved or used in processionary activity).

The Visitor Centre, which houses the free Sir Walter Scott exhibition, is open daily from 10am to 5pm.