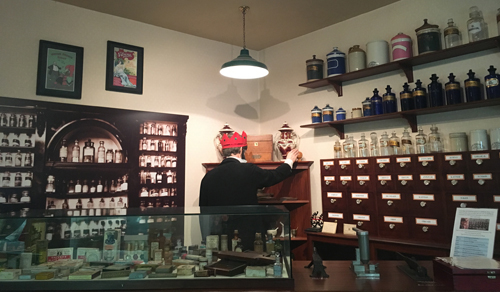 Tucked away in the corner of a Worcestershire hospital is an informative, occasionally ghoulish, museum devoted to medical history, writes Nell Darby.

The City of Worcester is home to not one, but two, medical museums, both of which are free to visit. One, The Infirmary, is located in the city centre, as part of the University of Worcester campus, and tells the story of the British Medical Association; the other, the less easy to find George Marshall Medical Museum, is a little way out of the city, being part of the Royal Worcestershire Infirmary complex of buildings. It is this tiny but perfectly formed, museum that we’re focusing on here.

The George Marshall Medical Museum is named after a former Worcester GP. Marshall was originally from Scotland, born there in 1906, and started work as a GP in Worcester in 1931. He collected old medical and surgical equipment – and his collection became substantial enough to form its own museum. Its current location is not the most obvious one for a museum; and – as with most hospitals in Britain today – you have to compete for a parking space at the hospital with those who obviously need that space more than you (of course, if you’re local, you could walk – but museums need a good amount of patronage to survive). Although the hospital is sizeable, the museum is well signposted, and the building that houses it – the Charles Hastings Education Centre – is a modern place with a large sign advertising it outside.

The museum actually starts before you enter through its doors, halfway down a long corridor, for along the corridor are interpretation boards telling you a bit about the history of medicine – so make sure you don’t miss these! But once inside, you are faced with a single long, fairly narrow, room with information panels and glass cabinets lining both sides. It is arranged thematically, and also includes two recreations of historic medical scenarios – the first is an apothecary’s shop, and the second an 1870s operating theatre to explore. This latter is good and gory, and will be enjoyed by many children – you can see a man having his leg amputated; he is conscious, lying on an (original) operating table, with blood and rags filling a bucket at his feet.

A history of medicine

Although the artefacts are obviously important, don’t skip the information panels, which have a huge amount of information, presented in an accessible way. There’s both local and not-so-local history, such as a chronology of medical history, and a history of the Worcester Infirmary, which dates back to 1746. Then there is the thematic content, including sections on public health; the NHS; home and domestic care; home medicine; paediatrics; and caring for the poor. There’s also a section on ‘quack’ medicine, and information about related occupations, including dentistry.

There is a good range of artefacts from across the history of medicine; one particularly fascinating item is a built-up boot that would have been worn by someone with a short or deformed leg back in the 19th century. Other artefacts include an early 19th century operating chair, which was used at the old Worcester Royal Infirmary in the city centre; it has holes in the sides to strap patients in and hold them still – vital for pre-anaesthetic days.

It’s not just all about medical history, however – if you’re researching the history of crime, you’ll also find something in particular here to whet your interest. Firstly, in the museum itself, is a wizened looking death mask, which doesn’t look terribly appealing. It’s perhaps not in the best of conditions, but it’s an unusual specimen. It is the death mask of a man with microcephaly – where the head is far smaller than normal. Although his name isn’t known, it’s believed he was probably an agricultural labourer who was convicted of sheep-stealing, and hanged in Worcester in 1800. His body was obviously in keen demand by medical men due to his condition, and hence the interest in creating a death mask after his execution. This isn’t, though, the only death mask on display – although it’s oddly easy to miss the others. On your way in or out of the museum doors, look above you: there are two shelves, each full of other criminal death masks.

Onto more positive themes, however, and there’s information about an oral history project that the museum is running, which aims to record the memories of local people who have worked in medicine and health care over the past century. You can also find out about a new publication the Worcester medical museums have produced – Doctor Sherlock’s Casebook, by Dr Frank Compton, lists the patients who were admitted to the Worcester City and County Pauper Lunatic Asylum between 1854 and 1881 (contact the museum to find out more).

Whichever bit of medical history you’re interested in, you’re bound to find something to get your attention at this tiny museum; it’s well worth the trip to hospital!

The museum illustrates the history of medicine, nursing and the associated health care professions, with particular reference to Worcester and the surrounding area. It contains 500 items of equipment including a reconstructed 19th-century operating theatre, apothecary's shop and death masks believed to be of hanged criminals.

An interactive exhibition at the University of Worcester's City Campus combining history, science, art and technology to explore the medical stories of one of England's oldest infirmaries. Collections: Displays incorporate the collections of the George Marshall Medical Museum, also in Worcester, and include medical, surgical and nursing equipment, archives, photographs, uniforms and other associated paraphernalia of the last 250 years.