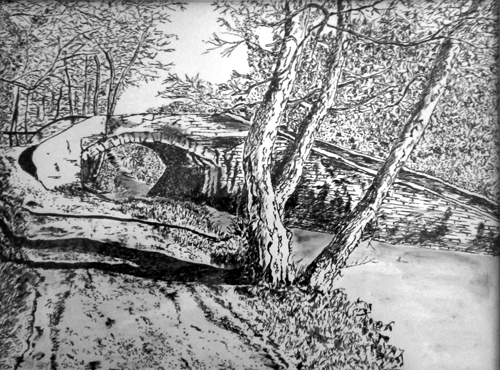 From Mid Wales to the Black Country and back, Hannah Evans had a hard life on the canal system, writes Raymond Humphreys.

Life could be hard for anyone sucked into the early industrial revolution. The story of my great-grandmother, Hannah Evans, illustrates this. Hannah was born in Guilsfield, Montgomeryshire in 1848, the second of the four daughters of William and Mary Evans. William worked on the canal network between Mid Wales and the Black Country. In Guilsfield, a branch of the Montgomeryshire canal began.

There were over 4000 miles of canals built before the middle of the 19th century. In centres of industry such as the West Midlands, waterway densities were high. But, by the date of Hannah’s birth, the system was already beginning its long decline in the face of competition from railways.

Canal people were of low status, even among fellow industrial workers. Living space competed with cargo space. Hannah would have done her share of heavy canal work such as ‘legging’, the practice of propelling the boat through tunnels by means of using the feet against the tunnel roof.

There is a great deal of information available for those researching the history of ancestors who worked on the canals. A good place to start is the Canal & River Trust Archive Catalogue (collections.canalrivertrust.org.uk), maintained by the Waterways Trust. The London Canal Museum (www.canalmuseum.org.uk) also provides some helpful pointers.

A wealth of information can be found on George’s Canal Boating in the UK and Europe site, particularly the internet resource page at www.canals.com/resource.htm.

There is a good searchable register of Coventry canal families on the Coventry FHS website (www.covfhs.org/databases/canal-boats.php). But don’t forget the standard genealogical sources – even if canal families didn’t always trouble to formally register events like marriages and births, they can still often be found on censuses.

Small wonder, then, that Hannah took the opportunity when she was only 18 to marry outside of the waterways fraternity. She made an unwise choice with John Humphries. John’s family had slipped down the social scale. His great-grandfather, Edward Humphreys, had, in the late 18th century, come from Shropshire to work on the Newcomen steam engine in Dudley Castle. But his son, Joseph Humphries, ended his days as an ‘engineer pauper’. His fifth child was John’s father. This son was also called Joseph and in his short life never made the status of an engineer, only an ‘oiler and dresser’. The younger Joseph was baptised in 1823 and died in 1853, when John was only seven. His widowed mother, Mary née Meek then married a Charles Maybury in 1854 at West Bromwich.

On 28 July, 1867, when John Humphries and Hannah Evans married in the Church of St Luke, Bilston, he was described as an ‘iron puddler’. Iron puddling, the process of producing malleable wrought iron in appreciable quantities, was perhaps the crucial step in the industrial revolution, taken in the late 18th century.

There was only one child of the marriage of John and Hannah – Charles Henry Humphreys. As one of the early beneficiaries of the 1870 Education Act, he later chose to spell his surname in this way. Charles, my grandfather, was born on 19 June 1868 at Woods Bank, Darlaston, another dark and industrial area. His parents’ marriage, though, was short lived. The census of 3 April 1871 recorded John living alone as a boarder in Skidmore Buildings, Wednesbury, not far from his birthplace of Old Moxley. We assumed he’d have been living a solitary life for the rest of his days.

However, this wasn’t so. Later, he went to Sheffield, where in 1883, he bigamously married Elizabeth Houghland, falsely declaring himself to be a widower. Together, they had a family of four children. John’s end on 29 June, 1898 is enough to make anyone reading his death certificate shudder. He died in South Yorkshire County Asylum of ‘exhaustion following uremic convulsions’.

What of Hannah and her son? They weren’t anywhere in the West Midlands on the 1871 census. We knew my grandfather had been living in Newtown, Montgomeryshire during the early 1880s, before he was attracted as a young man to the then thriving coal industry in the Rhondda Fach. Eventually, they were found on the 1881 census, living in Canal Basin, Llanllwchaiarn with a man called William Woodhouse and several of Charles’ step-siblings.

As the result of a chance encounter, my sister made contact with descendants of these step-siblings. They told her their family legend. William Woodhouse was supposed to have brought my great-grandmother and grandfather from the Black Country to Newtown ‘on a boat’ and set up home with her. Some of my grandfather’s step-siblings, including the eldest, born in 1873, followed my grandfather to the Rhondda Valleys and settled there.

The idea of the ‘rescue’ of Hannah and her toddler son by boat sounds romantic and seemed to fit in with the facts. We were confident we’d find Hannah and Charles on the 1871 census for Newtown. William Woodhouse was on the entry for Canal Basin, but he was living with his mother and worked as a labourer, though not on the canal.

Then Hannah’s parents were discovered on a canal boat called ‘Morn Robert’ in Whittington, Shropshire in 1871. Had the Woodhouse family legend become garbled over the years? Was William Evans the one who ‘rescued’ Hannah and her son from the West Midlands? Perhaps they were even on the boat moored in Whittington in 1871, although undeclared for the census? This must remain pure speculation.

There are happier outcomes to this story. My grandfather married on 2 June 1888. He and his wife, Emily Ann née Jones, had a large number of children, one girl and 17 boys, of whom my father was the youngest. My grandfather lived until 1945, dying when my father was still on army service in Belgium.

After setting up home together, Hannah and William Woodhouse had seven children. In the later 19th century, Hannah became a nurse and a respected member of the local community. The 1901 census records Hannah going about the work of her profession. She died while attending a case on 27 August 1906, and her death was reported in the local papers:

“With startling suddenness, death removed from our midst on Monday, a well known and much respected inhabitant of the town in the person of Hannah Woodhouse, wife of William Woodhouse, Old Church Place. Deceased who was 57 years of age had been a nurse for many years and she was following her employment on Monday when taken ill suddenly. Dr Trumper was immediately summoned but the patient passed peacefully away within a very short time, the cause of death being heart failure. The funeral took place at the Parish Churchyard on Thursday.”

This report, from the Montgomery Express, seems the natural way to end Hannah’s story.

Canals are in their second golden age, this time as a leisure facility. Narrowboats are available for hire from more than 100 companies across the country. Even if strenuous pleasure activities are not for you, there are many cruises available where someone else skippers the boat. Canal Junction lists many cruises at www.canaljunction.com/canal/trips.htm.
If your interests are in the canals of yesteryear, Wikipedia has a useful guide to existing canals at en.wikipedia.org/wiki/Canals_of_the_United_Kingdom#Canals_in_England. Among many useful features, the page lists canal museums. Good insights into the lives of canal folk are available on www.towpathtreks.co.uk/About/canal_people.html. This site also gives some other interesting details of particular canals. The Canal Museum lists a few of the large number of museums available elsewhere in the UK at www.canalmuseum.org.uk/waterways-museums.htm. Many smaller canal museums exist all over the country. Try also the Black Country Museum at www.bclm.co.uk for a wider look at our industrial heritage.