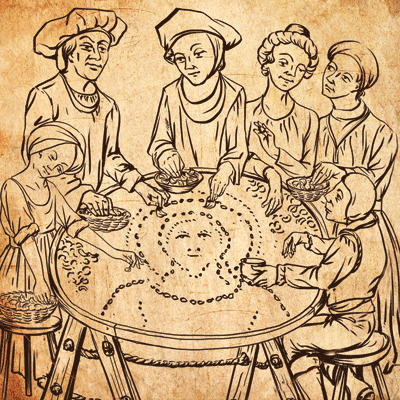 Cate Williams looks at how the plague revived the tradition of dressing wells.

The practice of well dressing involves decorating a water source with a picture created from natural materials. It is thought to have originated in the southern part of the Peak District, known as the White Peak. Here, porous limestone rock lies close to the surface and water seeps through it rapidly, leaving the ground dry even after rain. Nowadays, we understand that the water continues to flow underground, but ancient Britons didn’t realise this, and the vanishing rivers and springs filled them with fear. They showed their gratitude to the water god for water sources that never ran dry by sacrifice and decorating the wells with flowers.

It is not known exactly when well dressing originated in Derbyshire – it may even pre-date the Celts. However, this form of water worship is thought to have been revived in a village called
Tissington in the middle of the 14th century. The catalyst for the revival was an outbreak of plague that killed nearly half the population of the country. The inhabitants of Tissington escaped the epidemic and attributed their survival to their pure water source.  Over the years, the tradition waxed and waned, but it was always reinstated in villages that had survived times of hardship and drought. Recently, the custom (without the sacrifices) has been revived in many Derbyshire villages as a tourist attraction.

The main tableau is built in sections using a number of wooden trays or ‘boards’. Nails are knocked into the boards which are then soaked – the wood needs to be wet to prevent the clay, which is applied to the surface, from cracking. Before smoothing it over the boards, the clay is made malleable by trampling on it. This messy process is known as puddling.

A pattern of the full-sized picture is then placed on top of the clay and the design is transferred to the latter, usually by pricking through the paper with a sharp point. The picture is outlined using natural materials such as seeds, wool, alder cones, peppercorns, straw or wood. The next step, filling in the picture using flowers, seeds and berries, is known as flowering or petalling. The least perishable materials are applied first, leaving the petals until last as these fade quickly. A well dressing takes about a week to create and lasts for about the same amount of time. Well dressings can be seen in Derbyshire from May to September each year.

Creating a well dressing is very time consuming and labour intensive, but brings villagers together. A well dressing team first has to decide on a theme, usually a religious or topical event, and then a design is created around that theme.