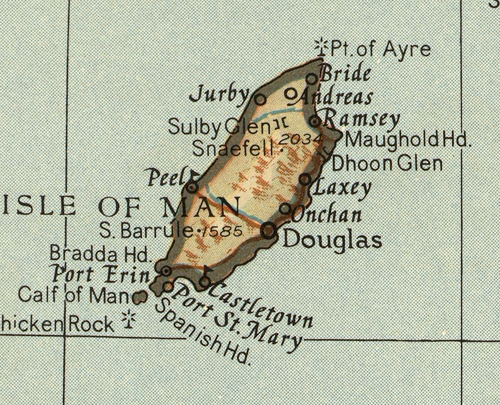 The Isle of Man has many useful sources, and both online and traditional research techniques have their place in tracking down Manx forebears, writes Anne Corlett.

Manx family history research is a relatively straightforward undertaking when compared with other regions. The island’s small population (fewer than 30,000 residents in the early 1800s) means that there are fewer records to search through. Furthermore, ancestors who left their home parish couldn’t go far, unless they left the island altogether. It’s worth being aware, though, that there was regular movement between the Isle of Man, Ireland and north-west England.

Surviving records tend to be well-organised, with a large body of material available online. The IGI is described as ‘virtually complete’ for Mann (as the island is also known), and a useful section of the Manx Notebook website (tinyurl.com/p47s7ms) details the record coverage for each parish, complete with information about the various gaps. More information can be found at www.imuseum.im.

Manx probate records are a rich source of information, with more women making wills here than in other regions. From 1885 the High Court of Justice dealt with Manx probate, and between 1874 and 1885 the relevant court was the Consistory Court of Sodor. Before 1874, probate was the jurisdiction of either the Consistory Court or the Archdeaconry Court of the Isle of Man, depending on the time of year. The Isle of Man Family History Society has an online wills index (www.iomfhs.im/wills/Index_A-Z.html) covering all Archdeaconry records from 1631 onwards, and Consistory court records from 1659 onwards. There is no index covering the Consistory Court records for the period 1600–1658. Later wills (from 1911 onwards) are held at either the island’s Public Record Office (www.gov.im/pro) or the Deeds and Probate Registry (www.gov.im/registries/general/Deeds_Probate/).

The Manx iMuseum website (www.imuseum.im) has digitised copies of Manx newspapers from 1792 to 1960. This is a subscription service, but you can search for free to see what is available before deciding whether to sign up.

For other online resources relating to the island it’s worth having a look at Genuki or at the links on websites such as the Manx Manorial Roll (tinyurl.com/paccsao). You may find that you can make good inroads into your Manx family tree from the comfort of your own front room, but the island is definitely worth a visit. The National Library and Archives reading room, located at the Manx Museum (tinyurl.com/o88ezop) is well-organised and has many potentially useful resources are not available online. If you’re not able to get there in person, the Manx Museum has an information sheet for family historians, including details of local genealogists who can be contacted with a view to carrying out paid research.