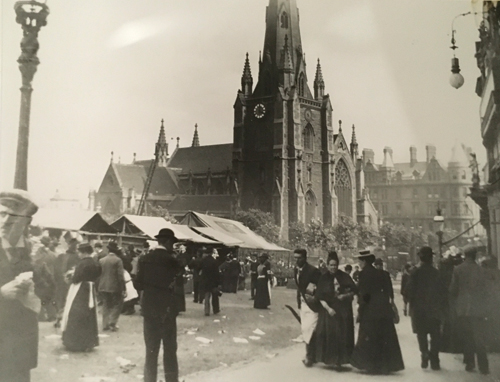 There’s a wealth of material to help you to discover how your ancestors lived, worked and worshipped in England’s second city, as Doreen Hopwood explains.

Today, Birmingham is home to over a million people and is renowned for its multicultural diversity. It’s come a long way since 1086, when the Domesday Book described it as ‘an insignificant agricultural settlement’ valued at just 20 shillings. Having no natural resources or any religious community to act as an impetus for development, Birmingham’s growth is a triumph of man over nature. Its location at the convergence of several major routes established Birmingham as an agricultural market centre. Soon after, industries emerged especially those connected with metals.

Birmingham was a manor, not a town, and could attract craftsmen and entrepreneurs because there were no restrictions on trades. It grew at the expense of guild towns such as Coventry and Walsall – where only those who had been born or served an apprenticeship there could set up in business. Birmingham was never dependent on a single trade or industry and its workforce was able to adapt to new fashions and technology. This diversity meant that any setback in one trade was easily compensated by the emergence or stability of another.

When buckles were replaced by buttons for fastening clothing in the early 19th century, the machinery was readily adapted to produce buttons, and during peacetime gun manufacturers made sporting rifles. Birmingham wasn’t only designing and manufacturing thousands of products, it was also making the machinery to produce them. Until the mid 19th Century there were few large factories, and three of the main trades – button, guns and jewellery manufacture – were undertaken in small workshops with only a handful of workers. Trades became concentrated in specific areas, and although there’s little left to see of the Gun Quarter, the Jewellery Quarter is thriving and is home to the Pen Museum (www.penmuseum.org.uk) and the Museum of the Jewellery Quarter (www.birminghammuseums.org.uk).

In 1801, the population was 60,822, but by 1901 it had risen to 522,204, and almost doubled again by 2011. This phenomenal rise couldn’t be accounted for by natural increase alone. Much of it was due to migration and the expansion of Birmingham’s boundaries. By the early 20th century, it had absorbed suburbs which were formerly in Staffordshire (Handsworth, Harborne, Moseley) and Worcestershire (Kings Norton, Northfield, Yardley), as well as in Warwickshire (Aston, Erdington).

Industrialisation provided plenty of work for migrants who came from far and wide – initially from neighbouring rural areas, followed by Irish and Welsh migrants. By 1900, Birmingham had a vibrant Italian Quarter, and many Eastern Europeans had settled in the city. The 20th century saw an even greater influx, from all parts of Britain and Ireland, but especially from New Commonwealth countries, all adding to the cultural diversity for which Birmingham is now famous.

The main repository for material for researching your Birmingham ancestors is the Library of Birmingham (www.libraryofbirmingham.com), and the two main areas for family history research are on the 4th floor. The Heritage Research Area holds printed and published sources including maps, directories, electoral registers and a large collection of publications relating to all aspects of Birmingham, such as histories of specific industries, suburbs, institutions and organisations. Voters lists for the Birmingham Electoral Registration District (up to about 2001) are on open access, together with directories from the 18th-20th centuries and some can be searched at www.midlandshistoricaldata.org, which is also online at Ancestry. Newspapers and parish registers that have been microfilmed are available in this area, and you don’t need to book or have a reader’s ticket.

The Wolfson Centre for Archival Research holds original and manuscript sources, including parish records, photographs, local authority, hospital and court records. You’ll need to make an appointment (archives.appointments@birmingham.gov.uk) and a CARN ticket is required to access material. The Heritage Research Area and the Wolfson Centre have different opening hours, details of which are on the Library of Birmingham website, and there are useful downloadable information sheets about collections and resources. You can search the online catalogue at www.calmview.birmingham.gov.uk but this doesn’t include all of the records held, so the card catalogues may need to be consulted too.

Known for its religious tolerance, Birmingham has for centuries attracted people of all faiths. The Wolfson Centre holds the archives of the Birmingham Anglican Diocese which includes parishes which were formerly in Staffordshire, Worcestershire and Warwickshire. Many of the parish registers can be searched in the Birmingham collection at Ancestry, together with some parish records which may include poor law material and vestry minutes. However, some early records such as wills prior to 1858, bishop’s transcripts and marriage bonds and allegations are deposited at the Staffordshire County Record Office (www.staffordshire.gov.uk). Fully transcribed wills that were proven at the Birmingham District Probate Registry, covering the period 1858 to 1941, are at the Wolfson Centre, but letters of administration haven’t been included in these volumes.

When St Chad’s Cathedral was consecrated in 1841, it was the first Roman Catholic cathedral in England since the Reformation, and a large Irish community developed nearby. Its records are held at St Chads (www.birminghamarchdiocesanarchives.org.uk; at time of writing, the archives were, however, closed to visitors pending the appointment of a new archivist) but many registers are available online at Findmypast. There’s been a Jewish community in the city since the 18th century, and you can find out more at www.jewishgen.org. The ecclesiastical census of 1851 listed 53 Protestant non-conformist congregations – double the number of Anglican places of worship. There’s a collection of non-conformist records at the Wolfson Centre, and many registers (up to about 1840) can be accessed online at TheGenealogist (www.thegenealogist.co.uk).

Birmingham’s first newspaper, the Birmingham Gazette and Correspondent, ran from 1741 until 1956. There have been numerous others, and most are available on microfilm in the Heritage Research Area at the Library of Birmingham. Some can also be accessed at Findmypast and the British Newspaper Archive (www.britishnewspaperarchive.co.uk). There’s also a large collection of suburban directories and publications, school, works and parish magazines.

Volume 7 of the Warwickshire County History Series is dedicated to Birmingham, and it includes a brief history of every place of worship within each faith. It also includes similar information about local authority schools and can be accessed online at www.british-history.ac.uk. It’s worth purchasing a civil registration certificate from the Birmingham Register Office (www.birmingham.gov.uk) as, unlike certificates issued by the GRO, they include the actual signatures and marks. The Midlands Ancestors family history society (formerly the Birmingham and Midland Society for Genealogy and Heraldry) covers much of the region and information about its activities and resources can be found at www.midland-ancestors.org.

Even though the house where your ancestors lived, the church where they worshipped and their workplace may have disappeared, you should be able to find some surviving records.

The OS 1:500 series of street maps (late 19th century) at the Library of Birmingham provide an enormous amount of detail – including the location of water taps in the courts of back-to-back houses and summer houses in the gardens of the well-to-do. The large collection of photographs covers all aspects of Birmingham life, which may include locations associated with your ancestors.