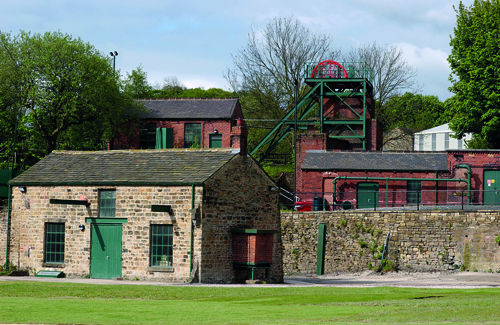 Learn about our industrial past with this Yorkshire museum. By Nell Darby.

In 2016, the last deep coal mine in the UK – Kellingley Colliery in North Yorkshire – closed, bringing to an end our long association with mining. Many of us will have had family members and ancestors who made their living as miners, but it still seems strange to think that this occupation is now relegated to the history books here. So, as coal miners in the family becomes a thing of the past, how can we find out more about it as an occupation, and teach our children about the conditions their ancestors worked under?

Of course, several mining sites have become repurposed to become visitor attractions that shed light on aspects of our mining history: there are several in Cornwall alone, relating to its tin and copper mining history, such as the Poldark Mine (www.poldarkmine.org.uk), Geevor Tin Mine (www.geevor.com) and the King Edward Mine Museum (kingedwardmine.co.uk).  In Wales, there is the Big Pit National Coal Museum (museum.wales/bigpit/) which is located in Blaenafon, and includes mining galleries and a tour round the colliery buildings. All are well worth a visit (and, in particular, enjoy the views from the Geevor Tin Mine’s café!).

But the purpose of this feature is to highlight another mining museum – the National Coal Mining Museum for England, in Yorkshire.

The National Coal Mining Museum for England is based at Wakefield’s Caphouse Colliery, which was originally known as Overton Colliery. Part of the Denby Grange Estate, it was owned by one family, the Lister Kayes, and was being worked for coal by the 1790s. In the 1820s, Sir John Lister Lister-Kaye expanded the colliery, and it was linked to the Calder and Hebble Navigation waterway initially by a wooden wagonway, and later by a railway.

In 1876, the colliery was further developed, when Emma Lister Kay commissioned new buildings, including a steam winding engine house and a boiler yard. The colliery was sold in 1907, but continued in operation, with more expansion taking place in the 1930s, and others upgraded a decade later. Although in the late 1970s, over 200 men were employed at the site, the coal reserves were exhausted by 1985, and Caphouse Colliery closed after two centuries of operation. Three years later, it opened as a museum, being initially known as the Yorkshire Mining Museum.

A key part of visiting a mining museum is the opportunity to go underground, and this Wakefield museum is no different – here, as long as you’re over five years old, you can venture 140 metres below ground to experience the conditions miners worked in. Underground tours take around 75 minutes, and it is recommended that visitors wear warm clothes and ‘sensible’ shoes. However, visitors also get to wear miners’ wear – a hard hat and battery lamp – and see aspects of mining for themselves, from Victorian times, when women and children would have worked alongside the men, all the way through to modern times. The guides are former coal miners, thus giving an insider’s guide to what it was like working underground. You can also tour the furnace shaft – here, you learn about the dangers facing those who worked underground, and look through the glass-topped furnace shaft: from here, you can look all the way down to the bottom of the mine (and those at the bottom can look back up to you!).

You can look at the original pithead, see the 1870s steam winder, and visit the pithead baths where miners cleaned themselves after their shift ended. You can also see how injuries sustained underground were treated in the mine’s medical centre. There is also information about how machinery was used in mining, and an exhibition about the home and leisure life of miners. In short, there’s plenty for all ages to do and learn – children can go on the Go Mining! Interactive tour and find out more about the pit ponies – how they were kept underground, fed, and mucked-out, among other things! Children will come away having learned about their local history, coal mining and science: as will adult visitors, of course.

Researchers visiting the museum will be pleased to hear that there is an on-site library, which includes books on different aspects of coal mining history, including mining disasters, working conditions, unions, welfare and training. It also holds some special collections, including the Eastwood Collection and the Coal Meters Collection. The former contains mining related texts mainly from the 19th century, including histories of mining and records relating to economic, technological and social developments in British coalmining. With regard to the latter, Coal Meters were employed to collect the tax revenue on coal, and the Coal Meters Collection includes details of legislation dating back to the 17th century. You can find out more about its holdings by looking at its online library catalogue at lib.ncm.org.uk/liberty/libraryHome.do. The library is open on Tuesdays and Thursdays, 10am-12.30pm and 1pm-4pm.

There are also two changing exhibitions – one is an annual special exhibition, aand the other a guest exhibition – on aspects of mining history, so look at the museum’s website to find out what is currently on or planned. If you time your visit right, you may also be able to travel round the site on a special train – a battery powered locomotive that was once used to transport miners to the pit bottom. This runs at weekends during the summer period (April to September) and in school holidays, weather permitting.

The National Coal Mining Museum for England is a great day out and offers visitors the unique opportunity to travel 140 metres underground, down one of Britain's oldest working mines, where models and machinery depict methods and conditions of mining from the early 1800s to the present. Experienced local miners guide parties around the underground workings, delivering one of the most engaging and memorable days out.