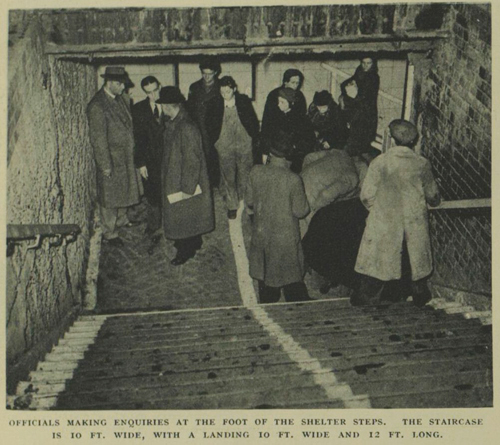 The construction of Bethnal Green tube station, as part of the Central Line extension, was still incomplete in March 1943, although the tunnels had been largely finished. Since 1940, the station had been used as an air raid shelter, after being requisitioned by the government. Particularly during the first Blitz in 1940, local people had taken shelter there – sometimes not for long, but in other cases, having to sleep down in the depths. 5000 bunks were provided at the site, and tea was served ‘down below’.

On 3 March 1943, at just after a quarter past eight in the evening, the Civil Defence air raid siren sounded. There was initially little panic, for people knew the drill: they started to file down the blacked-out stairs that led from outside down to the tunnels. However, a woman and a child suddenly fell over near the bottom of the staircase, causing others to stumble and fall as more people continued to try and enter the station and the stairway. Soon, there was a mass of people, struggling to get free, and they started to be crushed and subsequently asphyxiated. 173 died – mainly women and children – and a further 60 people were hospitalised.

Wartime reporting restrictions were in force, and as a result, there was no reporting of the disaster for three days; when it was finally reported, the news was censored. As a result, various incorrect stories made the rounds, from there being a German hit on the station, to there being a mass panic, causing a stampede. In reality, it was an accident waiting to happen: a crush barrier or central handrail had previously been recommended for the staircase, to reduce crowds, but the idea had been rejected on the basis of cost.

Today, the disaster remains the largest single loss of civilian life in the UK during World War 2. The people who perished are remembered in a plaque at the site, together with the ‘Stairway to Heaven’ memorial, which was only unveiled last December. For more information, see www.stairwaytoheavenmemorial.org.