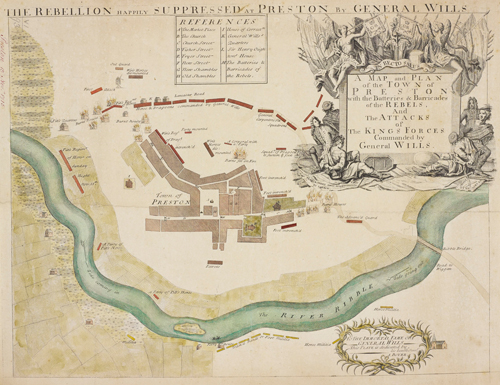 November 2015 marked the 300th anniversary of what is widely held to be the last battle on English soil – the showdown between Jacobite rebels and an army loyal to George I at Preston in 1715. It was both the first and last battle for the Northumbrian element of the 1715 uprising, ending in surrender and recrimination, yet had it been better organised, it could have been much more dangerous.

Though the ultimate aim of ‘The Fifteen’ was to restore the Stuart monarchy to the Scottish throne, it wasn’t dynastic loyalty that drove the rebellion, but a groundswell of anti-Hanoverian, anti-union and political grievances. Even eight years on, the union was deeply unpopular among Scots, with petitions to dissolve it being made as recently as 1714. Meanwhile, the ascension of the Hanoverian George I in the same year had caused consternation on both sides of the border. A man who knew little of the country he now found himself monarch of, he had ushered in an almost exclusively Whig government, enraging the Tories favoured under Queen Anne and sparking riots across England through the spring and summer of 1715.

It was against this backdrop that John Erskine, Earl of Mar, raised the Jacobite banner in Scotland on 6 September, proclaiming James Francis Edward Stuart – son of James II and better known today as the Old Pretender – as James III and VIII. A month later Northumberland followed suit, with Tory MP Thomas Forster and his allies raising the standard in Warkworth.

In Scotland thousands answered Mar’s call, but for the Northumbrians it was a less than fairytale start – only 300 rallied to their banner, rather than an anticipated 1000. They marched south intending to take Newcastle, but found it had declared for Hanover. Bereft of a plan, they began to wander the county without aim. Things took a turn for the better when Forster learned that the Jacobites in the Scottish lowlands had risen, and that highlander reinforcements from Mar were on their way, and he was able to link up with both by 22 October. But although they were now a more impressive force,  around 2000 strong, the Northumbrian Jacobites still couldn’t agree where to go.

By this time, the rebels were being hunted by a Hanoverian force led out of Newcastle by Lieutenant-General George Carpenter. Some of the English Jacobites argued they should face him head on, others that they should flank Carpenter and assault Newcastle. The lowlanders lobbied to establish a Jacobite capital at Dumfries, while the highlanders wanted to go even farther north to support Mar directly. Even now, while ostensibly fighting for the same cause, they remained divided by their national interests.

Ultimately, the decision fell to Forster – who had been appointed commander, despite having no military experience, in the hope he would sway more Tories to their cause. He opted to press south to Lancaster, after receiving news that 20,000 men would join them there. Around 500 of the highlanders decided they couldn’t countenance fighting in England and promptly deserted.

The remaining Jacobites reached Lancaster on 7 November, where they were met with cheers and several hundred recruits, but not tens of thousands. Undeterred, Forster led them further south, arriving in Preston on 9 November. They were still there two days later, when word reached them that a second English force, led by Lieutenant-General Charles Wills, was closing in. Forster had no advance warning of Wills’s approach, possibly because his intelligence came from the same people who had promised him 20,000 men. Nor did he even believe it until the morning of the 12th, when he saw the loyalists appear on the horizon himself.

Wills had marched from Manchester with around 1600 men – one regiment of foot (Preston’s), one of horse (Pitt’s) and five of dragoons (Honeywood’s, Wynn’s, Munden’s, Stanhope’s and Dormer’s) – but this force was less formidable than it first appeared. They were well armed, but only Preston’s Foot and Pitt’s Horse were veteran units. The five dragoon regiments had been raised barely two months before, and while some of their men had served in the recent War of Spanish Succession, many more had never seen combat.

Wills crossed the bridge to the southeast of the town around midday, surprised that the Jacobites had not occupied what appeared to be an easily defensible position. In fact, they had, but their forward detachment here had been withdrawn as Wills approached – another decision that has, with hindsight, since been frequently disdained. The Hanoverians arrived at Preston that afternoon to find the Jacobites entrenched, and barricades in the main streets. Lacking the manpower to simply surround the town and starve them out, Wills ordered his foot and most of his dragoons into a series of costly frontal assaults, where they were caught in murderous crossfires from the barricades and the fortified buildings surrounding them. Though they secured several buildings, they had made little real progress by nightfall, when both sides began setting fire to buildings in an attempt to smoke the other out.

Robert Patten, a Jacobite who acted as Forster’s chaplain during the rebellion and turned King’s evidence in its aftermath, captured the intensity of the fighting. Describing one of the attacks, he wrote that the highlanders “made a dreadful fire upon the King’s forces, killing many on the spot, and obliging them to make a retreat” – though this, he noted, they did “very handsomely”. It is unclear how significant the inexperience of freshly raised Hanoverian units was. Patten also noted that the attackers were “for the most part raw… and seemed unwilling to fight”, something only countered by the bravery and conduct of their officers. Perhaps most telling are the overall casualty figures: an estimated 300 killed and wounded for the Hanoverians, but only 17 killed and 25 wounded for the Jacobites.

The next morning, after another one more abortive assault, Carpenter arrived, and the character of the battle changed. The Hanoverians now had the numbers to trap the rebels in Preston, and Forster knew it. After consulting his English comrades – but not the Scots – he sued for peace, asking for favourable terms. Wills simply responded that they could only “surrender at discretion”, which meant he would offer no guarantees as to their safety. It was all they could expect as rebels.

The Scots were outraged when then heard of these clandestine negotiations, with the highlanders adamant that they would sally forth and die with their swords in their hands. Talked down, the English and Scottish Jacobites argued through the afternoon, finally agreeing to lay down their arms on the morning on the 14th.

Many of the Jacobite leaders were subsequently executed, though Forster managed to escape from prison and fled to France. Around 650 of the rank and file were sentenced to seven years of slave labour on American plantations.

On the same day that the Northumbrians had debated their surrender, the Scottish Jacobites were forced to make a tactical withdrawal by a force one-third of the size at Sheriffmuir. Combined, these two setbacks fatally stunted the momentum of the entire rebellion before the Old Pretender had even set foot in Britain. He would not land in Scotland until December, where he was greeted by demoralised supporters and an uprising that had all but collapsed.

James Stuart, the Old Pretender, soon slunk back into exile, leaving for France  in February 1716.

Honeywood’s (or Honywood’s) Dragoons were formed in July 1715 in response to rumblings of increasing Jacobite support, and were put to the test barely two months later when they charged the barricades of Preston in 1715. It was not their last encounter with the Jacobites: the regiment took part in the action on Clifton Moor during the 1745 rebellion, which, to some, is the true ‘last battle on English soil’. It entirely depends on how you define a battle: Clifton Moor is often discounted as it is considered a skirmish. One final encounter followed at the rebellion’s decisive battle at Culloden.

The regiment was numbered as the 11th Dragoons in 1751, then the 11th Light Dragoons in 1783. It served in the Peninsular War, gaining battle honours for Salamanca and Waterloo as well as the nickname ‘cherry pickers’ after they were ambushed in a Spanish orchard. ‘Cherry’ would become part of their uniform in 1840, but for a much more stately reason: the regiment was adopted by Prince Albert after men of the unit formed part of his escort at his wedding to Queen Victoria. They, in turn, adopted his crimson livery and name, becoming the 11th (Prince Albert’s Own) Hussars. In 1854, they were part of the infamous light brigade that charged to its doom at the Battle of Balaclava.

Today the unit is part of the King’s Royal Hussars, and its regimental museum – HorsePower in Winchester (www.horsepower-museum.co.uk) – also holds papers, books weapons and paintings from all of its antecedent units. Access to the museum’s archives is available by appointment. For details, email assistant@horsepowermuseum.co.uk or write to HorsePower Museum, Peninsula Barracks, Romsey Road, Winchester, SO23 8TS.