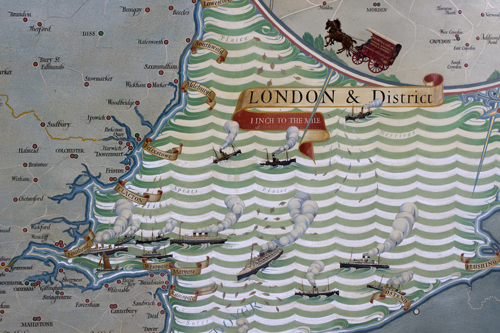 A rare map depicting WHSmith’s vast commercial empire in the 1930s, by a leading graphic designer of the last century MacDonald Gill, sold for £50,000 at Chorley’s Modern Art & Design sale. The extraordinary scale map, one of a number of lots from the WHSmith Archive, had an original estimate of £20,000-30,000.

The 7ft by 7ft map of Britain and Northern Europe was painted by MacDonald Gill for display in the boardroom of the company in Wiltshire in 1931. According to Mr Gill’s ledger he was paid £765 for the project, around £42,000 in today’s money. Not only did the map record the location of WHSmith bookstalls, bookshops and wholesale branches, it added decorative detail from bi-planes and horse-drawn vehicles right down to named shoals of fish in Art Deco waves off the coastline.

Eric Gill, Macdonald’s brother, designed the WHSmith typography for their signage. The artist designed several typefaces including Perpetua and Gill Sans, still used today. A E R, Three Designs for Lettering by Eric Gill, also originating from the WHSmith archive, by far surpassed its original estimate of £1,200-1,800 to achieve £16,000.