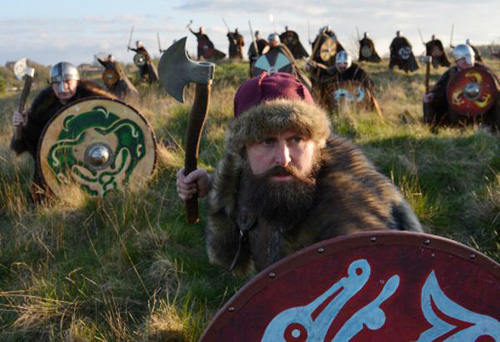 A 1,000-strong cast and crew has begun rehearsals for the UK’s biggest outdoor live theatre spectacular which takes place every summer in County Durham.

Performed on a 7.5-acre outdoor stage at Bishop Auckland, Kynren – an epic tale of England immerses audiences in the telling of a 2,000-year tale of history. Join Arthur, the son of a mining family, on his spellbinding journey through time.

The theme for 2019 is ‘The Year of the Viking’ and the cast are already hard at work perfecting some thrilling new stunts and choreography for the scene in Kynren, which takes place on Saturdays from 29th June to 14th September.

New elements for this scene in Kynren include a Viking longship burial on the water, with live Vikings on board, the kidnapping of a fisherwoman and lots of dramatic fiery effects and explosions.

For the first time audiences will be able to wander through an authentic recreation of a Viking village before the show which includes a cookhouse complete with vegetable patch, a woodworker’s cottage built into the hillside and a working blacksmith’s forge producing real chainmail.

The Cavalry, led by Anna Warnecke, Director of Cavalry and Estates, has a total of 33 performance horses who take to the stage in Kynren. They are all grey to make sure they stand out when it gets dark, but the breeds vary to include Lusitanos, Percherons, Wielkopolskis and Kladrubers.

Kynren – an epic tale of England is produced by Eleven Arches, a registered charity whose objective is to produce a world class historical show, underpinned by a foundation of an innovative and engaging arts, education and community development programme.

The cast and crew features a thousand local volunteers, with ages ranging from five to 82 years, working together with a world-class team of professionals.

Since its opening performance in 2016, Kynren is on track to bring half a million visitors to the North East by 2020.

*No show on Saturday, 3rd August.