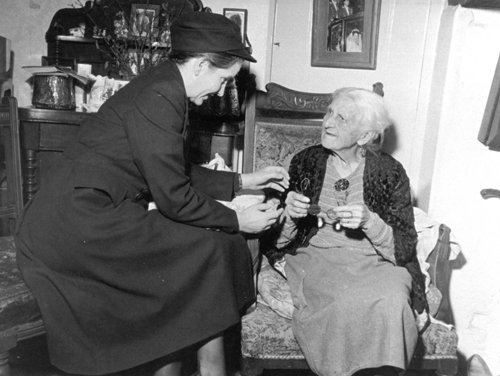 A new exhibition at the Royal College of Nursing shows how the way we care for older people has changed over the last 200 years, shifting from workhouses, institutions and care homes and into the 21st century.

‘Aspects of Age’ starts with the problematic history of admitting older people into workhouses, through to changes in hospital care in the mid-twentieth century and into the more enlightened care we see today, where more people are looked after in their own homes.

Exhibits include original Royal College of Nursing pamphlets on how to care for older people and how to set up a nursing home, an enamel bedpan and cup from 1914 on loan from the British Red Cross Museum and Archive, and a  ‘certificate of character’ for a workhouse nurse from 1912.

On loan from the Royal Pharmaceutical Society museum, are specimens of ‘sea skink’ from the late 18th century. These small lizards were believed to have aphrodisiac properties and were reported to ‘restore warmth in old age and decays of nature.’ There is also an original packet of Viagra from when it was first licensed in 1998.

The exhibition runs at RCN HQ in Cavendish Square, London 11 April – 20 September and is accompanied by a series of events exploring aspects of age in more detail. These include the RCN’s first Death Café in May and a panel discussion on ‘Sex Beyond 70’ in September. For full details of these and other events visit www.rcn.org.uk/whatson.