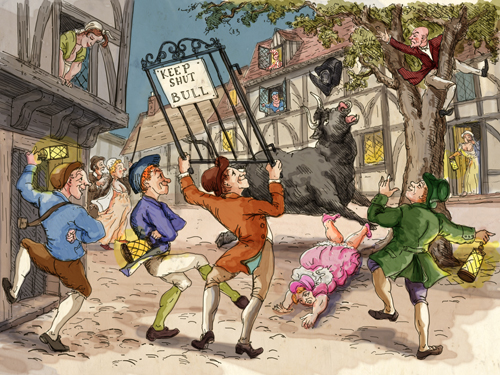 Lucy Williams looks at this autumnal celebration of troublemaking.

Mischief Night, also known in more recent years as Mizzy or Miggy Night, is an annual celebration of troublemaking popular in parts of England and Northern Europe. When or where Mischief Night first began is not precisely clear. Carnival days of tomfoolery, humour and chaos have long traditions across Europe from the medieval period onwards. However, many suggest that this unique and long-standing evening of rule-breaking first became popular in the 18th century, when schoolchildren were allowed to run amok the evening after May Day celebrations. As rural life declined in favour of industrialisation during the early Victorian period, the first written records relating specifically to the event of Mischief Night on
4 November began to appear.

Mischief Night is most popular in England, Scotland, the US and Germany. Across the Atlantic, the festival is more commonly celebrated on 30 October rather than in November and, as a result, in many parts of the country Mischief Night has become fairly indistinguishable from the rest of the Hallowe’en holiday. The traditions of Mischief Night are responsible for the more modern phenomenon of ‘trick or treating’ which has, in the last few decades, been repatriated to Britain as a separate celebration. This gives the UK two nights of mischief a year.

After a particularly busy Mischief Night in 1930, the Yorkshire Post and Leeds Intelligencer reported that dozens of farm gates were removed from their hinges by pranksters and hidden around the fields. The ‘mischief’ allowed sheep, horses and cattle to escape into nearby towns, and it took hours to recover them. Two particularly adventurous horses were found grazing in a front garden, and a herd of cattle were apprehended making their way down a main road into a village miles away.

Observed primarily by children, Mischief Night has one simple rule – the rules do not apply. In theory, and often in practice, the young receive a free pass from their parents to play pranks and make mischief. In different localities, customs differ slightly – from dressing up or knocking on doors and running away to egging property and cars, smearing treacle or peanut butter on handles, pulling up plants, abducting garden gnomes and taking trolleys and bins for a joy ride. All of these are popular in Lancashire. In Yorkshire, the removal of garden gates is a long-standing tradition.

Once prominent across the UK, the custom has declined outside of the northern counties of England. Yet so ingrained is Mischief Night in English culture that some of those who observe it still falsely believe that Mischief Night coincides with a one-night-only legal pass, under which the police are obliged to turn a blind eye to minor transgression. In the 21st century, Mischief Night often only comes to the attention of the rest of the country when overzealous revellers cause havoc for the local police in areas such as Liverpool and Greater Manchester.