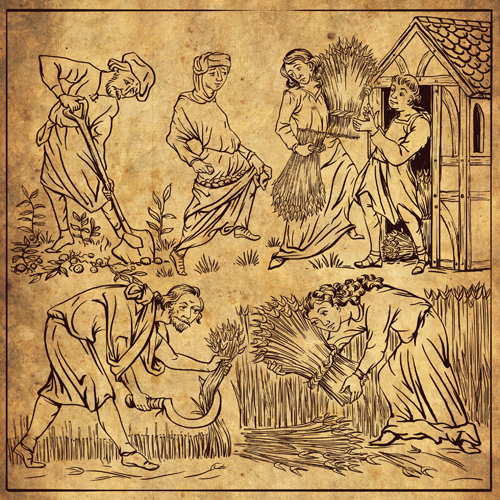 Cate Williams looks at the origins and history of this autumnal event.

‘Harvest’ originally comes from the Old English word ‘hærfest’, meaning autumn, but has come to refer to the season for reaping and gathering crops. Harvest time was, historically, one of the most important periods of the year, as the quality of the harvest dictated whether people would have enough to eat for the coming year.

In Britain, successful harvests have been celebrated since pagan times and many traditions have originated around this time. The first cut sheaf of corn was offered to the fertility gods to guarantee a good harvest the following year. The last patch of corn standing in the fields (sometimes called the ‘mell’) was thought to contain the ‘spirit of the corn’, and cutting it was usually accompanied by an animal sacrifice – often a hare caught hiding in the corn. However, cutting the mell was thought to bring bad luck to the person who cut it, so workers would try to avoid it. In some counties the mell was cut by farm hands throwing their sickles at it, in others workers would take it in turns to be blindfolded and sweep their sickle to and fro until it was cut.

Harvest time was exhausting, with farmers working around the clock, trying to ‘make hay while the sun shines’, and neighbouring farms racing against each other to be first to finish. The end of the harvest was a time for celebration – the horse bringing in the last cart load was decorated with ribbons and garlands of flowers, and farmers held a big feast known as the harvest supper.

These traditions continued in a slightly different form after Christianity arrived in Britain. The sacrificial offering was replaced by a straw hare made from the last sheaf of corn, to represent the continuity of the spirit. Eventually this led to the creation of plaited ‘corn dollies’, symbolising the goddess of the grain. These had a place of honour at the harvest supper, and then were hung from the farmhouse rafters until the next year.

The modern British tradition of celebrating harvest time with a thanksgiving service was introduced in 1843 by the Reverend Robert Hawker in Cornwall. The harvest festival service is held on or near the Sunday of the Harvest Moon (the full moon closest to the autumn equinox) and includes singing hymns, praying and decorating churches with baskets of fruit and vegetables. The produce is usually given to needy local people after the service.

Although some churches and villages still have a harvest supper, as people have come to rely less on home-grown produce the focus of festival celebrations in many churches has shifted to concern for people in developing countries who do not have enough food.