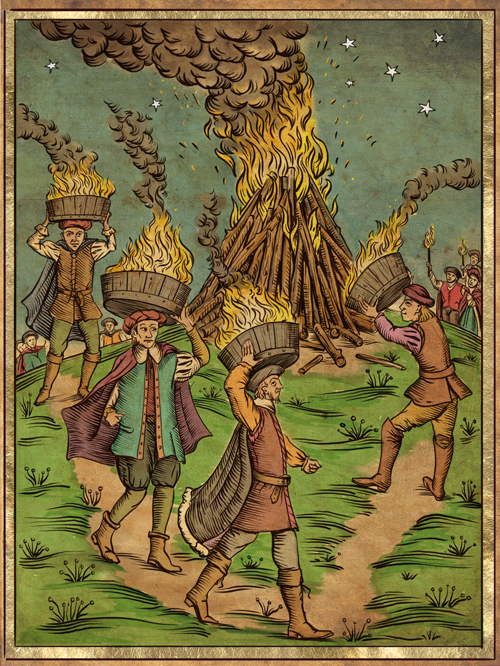 Cate Williams wards off the cold weather by exploring the history of these winter celebrations.

Many celebrations involving light and fire have their origins in ancient pagan rituals. One of the oldest winter celebrations in the world is Yule. This occurs around the winter solstice, when people in the northern hemisphere experience the shortest day and the longest night of the year. The winter solstice represents the rebirth of the sun, and has been traditionally celebrated with bonfires and other fire festivals.

Torchlit processions are a popular component of fire festivals in the UK. The ancient (thought to be Neolithic) tradition of Old Glory and the Cutty Wren was revived in 1994 in the village of Middleton in Suffolk. After dark on Boxing Day, a carved wooden wren is carried aloft by the light of flaming torches down the main street of the village to the Bell Inn. Here, Molly dancers (the East Anglian form of Morris dancers) accompanied by musicians dance in honour of the wren.

In Scotland, torchlit processions to celebrate Hogmanay take place in Biggar in Strathclyde, and Comrie in Tayside. The torchlit procession through the town of Biggar, followed by a huge bonfire to symbolise the burning out of the old year, is a re-enactment of an ancient Druid fire festival. In Comrie, locals carry flaming torches to the four points of the compass and then throw the torches onto a bonfire in the village square. This ancient torchlit procession is called the Flambeaux, and was originally performed to drive evil spirits out of the village.

More recently, fire festivals have been revived in Britain. They occur in many places in December to celebrate the winter solstice or to mark the end of the old year and the start of the new one. For example, in Wiltshire, the winter solstice has been celebrated most years since 2001 by illuminating the white horse at Alton Barnes with candles in jars.

A rather more spectacular Scottish fire festival to celebrate Hogmanay is held in Stonehaven, Aberdeenshire. At midnight, 60 locals, swinging home-made fireballs above their heads, make their way through the village to the harbour, where the balls are thrown into the sea. The idea behind the ceremony is to burn off any bad spirits left from the old year. It is thought to have started in the 19th century, but could be much older.

Another dramatic fire festival held on New Year’s Eve is the Allendale Fire Ceremony in Northumberland, which is thought to have pagan origins. Close to midnight, 45 ‘guisers’ (hereditary barrel carriers) parade through the town carrying whisky barrels filled with flaming tar above their heads. When the procession reaches the town square, the barrels are thrown onto a bonfire to light it, while spectators and participants shout “Be damned to he who throws last!”