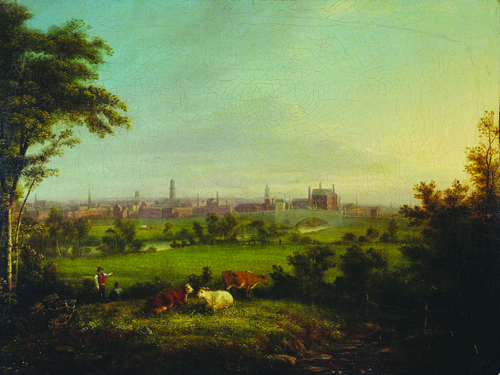 This West Yorkshire city has seen a recent resurgence, and it’s a mecca for shoppers: but what else does it offer the history-lover? Nell Darby explores.

It is today a fashionable city, home to an extensive number of high-end shops, and thousands of students studying at one of its three universities. It is also proud of its own history, with several museums displaying aspects of this history, from military history to industrial. It perhaps summarises the term Northern Powerhouse, and has a strong sense of identity – perhaps stemming from its importance as a manufacturing centre during the 19th century.

The importance of cloth

Although it has its origins as a forested area and part of a Celtic kingdom, and grew only slowly during the medieval era, by the late Tudor period, Leeds was a significant market town with numerous industries, and it became a centre for woollen cloth manufacture. White Cloth Hall was established as a place to trade its white broadcloth, and by the late 18th century, it was responsible for handling one-sixth of England’s export trade. Mills were established to produce wool and flax, including Marshall’s Mill, which was built by John Marshall at the end of the 18th century. In 1790, Richard Paley had built not just one, but two, cotton mills in the east of the town, but these were short-lived enterprises, with Paley being made bankrupt. Around this time, water power was being used for fulling cloth, and there was some mechanisation, but Leeds remained, ultimately, a market town rather than a major industrial centre. Times were clearly changing, however; by the end of the 18th century, steam engines, locomotives and other machinery for industry was being produced in a local foundry, and by 1821, there were nearly 20 mills in the city.

Leeds reached its zenith in the 19th century with the industrial revolution, which saw it continue to trade in wool and flax. In the 1820s, several woollen mills were established, and although cottage workers made clear their opposition towards mechanisation, factories were becoming the future, and the numbers of clothiers working from their homes decreased. However, numerous other industrial activities also operated here – from engineering and ironwork to printing. The textile industry spawned other trades – coal and transport, for example – but some burgeoning trades were separate. Industrialisation and the new factories and mills created jobs – the population grew, and more housing was needed. Not only were building materials needed, but so too were builders to construct this new housing. Eventually, this growing population, and the emergence of a consumer society, would also result in the opening of new shops, meccas of consumerism. Today, several of the city’s Victorian shopping arcades – in what is known, appropriately, as the Victoria Quarter – survive. Examples include Thornton’s Arcade, built in 1877, and the Grand Arcade, built in 1897, which is today Grade II listed, but still very much a centre of retail, specialising in local start-ups.

In 1864, the striking Corn Exchange was completed, having been designed by Cuthbert Brodrick, who also designed Leeds Town Hall and the Mechanics’ Institute (which is now home to Leeds City Museum). It had a large trading floor, where produce such as corn, barley, hops, peas and beans, as well as flour, was exchanged and sold. It continued to trade until the 1990s; today, it is home to several independent shops.

The canals were early coming to Leeds; the Aire and Calder Navigation started to be built in 1699. This made the river Aire navigable to Leeds, and the river Calder to Wakefield, by constructing 16 locks, this work being completed by 1704.  The aim was to link Leeds and Wakefield to York and the Humber. The Selby canal, a six-mile long canal, followed in 1778, giving the Aire and Calder Navigation an outlet for the next few decades (it was bypassed in 1826). The Leeds and Liverpool Canal arrived in 1816, a stretch of waterway covering over 120 miles, and crossing the Pennines. This linked the two cities of its name, and improved links between Leeds and the north-west, just as the Aire and Calder had improved links to the east.

From water to land, and the Leeds and Selby Railway further improved transportation to and from the city. This, the first mainline railway within the county, opened in 1834 – although individuals had been calling for such a railway line for around 30 years – and originally ran between Leeds’ Marsh Lane Station and Selby. The railway was soon taken over by the York and North Midland Railway, and continued to expand over the century. Other railway stations also opened over the 19th century, including Leeds Central in 1854 (it closed in 1967), and the current Leeds station, which was opened as the ‘new station’ in 1869, and became Leeds City Station in 1938.

In the 19th century, Leeds was home to many performers, and it is not surprising to find that it was also home to a major music hall – the City Varieties Music Hall, that survives today. This was built in 1865, and it is one of the few surviving examples of a Victorian music hall in England; it was the brainchild of Leeds pub landlord Charles Thornton, who established it as a music hall and ‘fashionable lounge’. It saw several famous entertainers grace its stage – including Charlie Chaplin, Marie Lloyd and Harry Houdini. The funeral of its former proprietor, Fred Wood, took place in May 1913, and his ‘great popularity’, as it was described in The Stage newspaper, led to a funeral service attended by a large crowd, as well as by representatives of the Yorkshire stage, from Charles Bush, manager of the Queen’s Theatre, and Harry Dunford of the City Varieties, to Mr Cunningham of the Cinematograph Exhibitors’ Association!

The Leeds Grand Theatre and Opera House, another surviving and still operational theatre in the city, was built in 1878, and was aimed at a ‘higher class’ of audience than that frequenting the music hall. It had more than one entrance, for only those with the most expensive seats were allowed to use the main entrance – other members of the audience had to use side entrances. In this way, the class distinctions of the audience could be rigidly adhered to, with the wealthier patrons remaining separated from those in the cheaper seats.

Leeds also has a claim to some early cinema history: it is believed that the earliest cinematic film was shot by the French-born Louis Le Prince in 1888, in the back garden of a family home in Roundhay. He filmed his son, parents-in-law (he was married to Leeds girl Elizabeth Whitley, whose father was his employer at a local engineering firm) and a friend simply walking in a circle, creating a short silent film that predates the work of the more famous Edison and Lumiere. Le Prince was not able to capitalise on his achievement, however, as he went missing in France just two years later.

The 20th century saw mixed fortunes for Leeds; education improved, and the city is now home to the universities of Leeds, Leeds Beckett, and Leeds Trinity. Some industries, however, declined. However, it is now seeing a resurgence in pride about both its past and its future, and it is well worth a visit.

History and heritage in Leeds