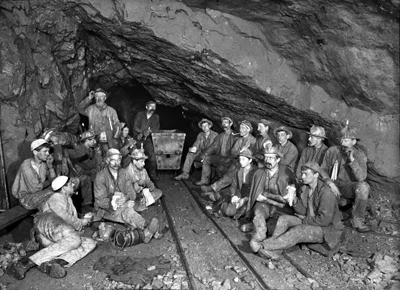 Mike Bedford, a Camborne School of Mines researcher, has long been fascinated with Cornish mine engine houses. Here, he looks at the county’s history and industrial heritage.

Although it’s rightly popular as holiday destination, it is all too easy to think of Cornwall as a bywater far removed from the UK’s industrial powerhouses and business centres. There’s a lot more to England’s most south-westerly county than pasties and ice cream, though; indeed, the county has made a vital contribution to the UK’s economy and has played an important role on the world stage.

The original inhabitants of Cornwall were of Celtic origin, having their own language, Kernowek, and before the Norman Conquest the county endured periods of rule under Rome and Wessex. It’s interesting to note that although around 320 Cornish settlements were recorded in the Doomsday Book, many of today’s largest towns are absent, being established much later to serve the industries that brought wealth to the county. For many years agriculture formed an important role in Cornwall’s economy as it still does today. Primitive tin mining dates back to the Bronze Age and continued during the Roman occupation and beyond, but it’s undoubtedly developments that occurred in the late 18th century and throughout the 19th century that really sealed the county’s place in the history books.

Today, tourism accounts for almost a quarter of Cornwall’s income, but the industry that is most quintessentially Cornish is surely mining. It would be wrong to consider Cornwall’s mining past as being concerned exclusively with tin, though. In addition to tin, other metals extracted from the ground include copper, lead, zinc, tungsten, antimony, bismuth, arsenic, manganese, nickel, cobalt, uranium, silver and gold. What’s more, kaolin, otherwise known as China clay, was and continues to be a hugely important product. The slate quarry at Delabole, also still active, was once Europe’s largest man-made hole in the ground.

As Cornish mining started to decline, miners found their skills were in demand abroad and mass migration ensued. In the Cornish Diaspora, as it became known, about a quarter of a million people, mostly miners, left these shores between 1861 and 1901. The saying that “wherever there is a hole in the ground, there will be a Cornishman at the bottom of it” wasn’t far from the truth, whether that hole was in USA, Canada, Mexico, Brazil, Australia, New Zealand or South Africa. The evidence of that Cornish heritage can be seen in many parts of the world today. Real del Monte in Mexico, for example, boasts abandoned Cornish-style mine engine houses – albeit overgrown by cacti instead of gorse – and holds a Cornish pasty festival each October. While this doesn’t exactly improve your chances of tracking down your Cornish ancestors, it does offer the possibility of some fascinating fact-finding tours.

From steam to satellite

Cornwall’s mining heyday was undoubtedly fuelled by the Industrial Revolution. Steam power could be used for pumping water, hoisting miners and ore from the depths, and crushing the ore on the surface, and Cornwall wasn’t slow to provide the necessary hardware. The county’s Richard Trevithick invented the first high pressure steam engine, and engineering companies established to supply mines in Cornwall and beyond with engines, pumps, rock drills and more included Holman Brothers of Camborne, Harvey & Co in Hayle, and the Perran Foundry at Perranarworthal.

Cornwall’s engineering prowess didn’t end with steam engines as developments in the county were also instrumental in bringing worldwide communication. From 1870, Porthcurno, just a few miles east of Land’s End, was the terminus for the telegraph cables that linked Britain with the rest of the world. The cable station here was the world’s largest and, also based here was a major training college for the communications industry. A few years later, radio pioneer Guglielmo Marconi, while being of Italian origin, chose Cornwall for much of his ground-breaking work. A radio station at Poldhu Cove on the Lizard Peninsula made headlines on 12 December 1901, when a signal transmitted from here became the first to span the Atlantic. More recently, in 1962, Cornwall made communications history when the satellite station at Goonhilly Downs received live television signals from the USA via the Telstar satellite.

Another major industry in which Cornwall has played a leading role is fishing and, in particular, pilchard fishing. While the communication industry was established in the west of the county, and mining was concentrated in a handful of areas, most importantly the Camborne-Redruth region and the St Just area near Land’s End, fishing was much less centralised. The industry got a toe-hold wherever fishing boats could be put to sea along Cornwall’s 400 miles of coastline, and so it’s hard to pick out any particular fishing ports. Many of them today double as tourist destinations, with the picturesque fishing fleets acting as a major pull to visitors. Even so, it would be wrong not to mention Newlyn, just west of Penzance, which was established as a harbour in the 15th century. It became one of the world’s premier sources of mackerel in the 1890s, and remains England’s largest fishing port today.

As a seafaring county, Cornwall also has its share of harbours with influence beyond fishing. Falmouth is the world’s third-deepest natural harbour, and was home to the Falmouth Packet Service from 1689 to 1851. It was also an important naval port for many years. China clay was exported from Par and Fowey from the mid 19th century to the present day, and Charlestown was an important port for copper ore and, later, China clay.

Today, this picturesque harbour is used as a base for sailing ships and looks much like it would have done in its heyday. While this might seem poignant, it  is just one example of how much of Cornwall’s tourism is inextricably linked with those industries that made the county great.