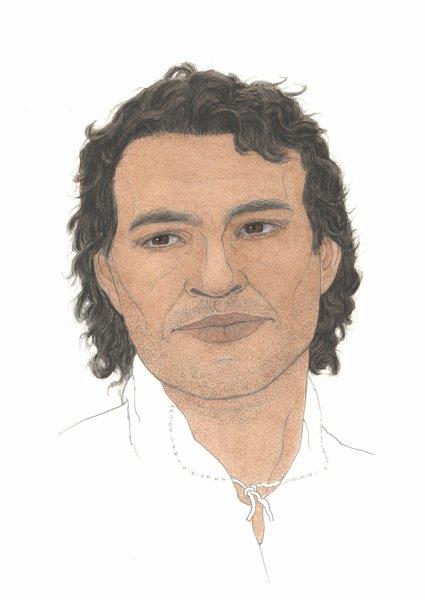 Were the crew of the Mary Rose white Englishmen or did diversity reign on board Henry VIII’s favourite warship?

The Mary Rose at Portsmouth Historic Dockyard is delighted to present The Many Faces of Tudor England exhibition which explores the latest scientific and genealogical findings into the crew of the Mary Rose. Held from 18 March – 31 December 2019, the display is in dialogue with the new documentary Skeletons of the Mary Rose: The New Evidence, part of the award-winning series Secret Histories. The hour-long show aired on Channel 4 at 8pm on 17 March.

Through interactive screens, documentary footage, print material and a reproduction of an intriguing crew member nicknamed Henry – the exhibition helps us answer important questions about the crew. What did they look like? Where were they born and what was their genetic heritage?

But what did we already know about the Mary Rose crew prior to the new discoveries? Before now, theories on the crew’s identity have been based on where they were found and what possessions surrounded them. Records preserve only a few names of those who worked on the Mary Rose over her 34 years of service, and we will never know the identities of most of those who lost their lives on 19 July 1545, the day the Mary Rose sank fighting the French in the Battle of the Solent.

Dr Alexzandra Hildred, Head of Research and Curator of Ordnance and Human Remains at the Mary Rose, says: ‘The Many Faces of Tudor England delves not just into the crew’s physical appearance and roles on board the Mary Rose but deeper into their lives. Based on new scientific evidence derived from isotope analysis as well as DNA testing of teeth and bones, the exhibition takes you on a journey of discovery, exploring the backgrounds of a number of the crew.  It also considers what the finds from the Mary Rose can tell us about diversity and globalisation in Tudor England, 500 years ago.’

The research that led to these remarkable findings was carried out by experts at Swansea University, Cardiff University and the University of Portsmouth.

Steven Perring, Story Producer at Avanti Media, the production company behind Skeletons of the Mary Rose: The New Evidence documentary, adds: ‘The recent scientific studies carried out on eight of the crew suggest that several were foreign born, including Europeans, and even possibly two members of North African origin or heritage. These discoveries have the potential to reverse long-held assumptions about diversity in Tudor England. Once again, the Mary Rose is rewriting what we know about the 16th century world.’

Dr Richard Madgwick, Lecturer in Archaeological Science at Cardiff University: ‘It’s only with the integration of a range of biomolecular methods that we’re able to provide these new insights into the diverse crew of the Mary Rose, with some coming from southern Europe and perhaps beyond. It’s exceptionally rare to reconstruct past life histories in such detail, from earliest life to death.’

‘Henry’, one of the most complete of the 92 reconstructed crew skeletons, is among the most intriguing discoveries. His bones and teeth tell us the story of his life. He was aged between 14 and 18. His left shoulder blade had deep depressions where the ligaments attached, and he had well-developed muscles. His spine showed signs of osteoarthritis and degenerative disease.

Oxygen isotope analysis of his teeth suggests that he was raised in Britain, in areas of high rainfall – the West or South, whilst his sulphur value suggests that he was born within 50km of the coast. This is consistent with his strontium isotope ratio, which suggests he was raised in an area of Palaeozoic geology, such as is found in North Devon. His nitrogen value is high, so he ate lots of animal protein, whilst his carbon value points to more of a land-based rather than marine-based diet. Analysis of Henry’s rib shows similar results to his teeth, so he probably didn’t have any great change in his diet in adolescence.

One of Henry’s teeth was extracted for DNA analysis. His nuclear DNA (information coming from both parents) suggest that he came from North Africa, making Henry genetically similar to current day Moroccans, Mozabite Berbers of Algeria or individuals from the Near East. His mitochondrial DNA (passed almost exclusively from mother to offspring through egg cells) is consistent with this ancestry but may also suggest that his mother hailed from Britain.

Dr Sam Robson, Senior Research Fellow and lead bioinformatician on the project, at the University of Portsmouth, says this research: “has been an incredibly interesting story to be a part of, and we have learned a huge amount along the way. Being able to take a snapshot of the past and uncover previously unknown information about these characters from centuries ago has been very insightful.”

Another particularly surprising discovery is that of the Archer Royal, who was found trapped under the rear axle of a bronze cannon on the main deck, his longbow beside him. Because of the famed longbow skills of English forces, it has always been presumed that this Archer was English. In his early 20s and standing 5ft 10in, he was taller than most of the crew. Although well-built and with particularly strong legs, the centre of his spine was twisted, a common feature of the Mary Rose crew found with archery equipment. This high-status individual was wearing a leather wristguard decorated with the Royal Arms of England and Katherine of Aragon’s badges – the triple turret of Castile and the pomegranate symbol of Granada.

But what is so special about this Royal Archer? Oxygen isotope analysis on his teeth tells provided a value is much higher than the British norm – one of the highest ever to be recorded in Britain – suggesting he was not born in Britain. A higher oxygen value suggests he grew up in a hotter climate. His sulphur value was very low so he was not raised near the coast. His nitrogen, carbon and sulphur values suggest a terrestrial diet with little or no marine food. His high nitrogen suggests he had diet rich in animal protein and his strontium isotope ratio could relate to limestone areas, which exist across Europe and parts of North Africa. It is now believed that this Royal Archer may have come from inland North Africa, over 50 km from the coast.

Given that the new discoveries point to a much more multicultural crew than we previously thought, the question arises: what further insights might a study of the remaining crew provide and what does the Mary Rose crew say about British national identity today?