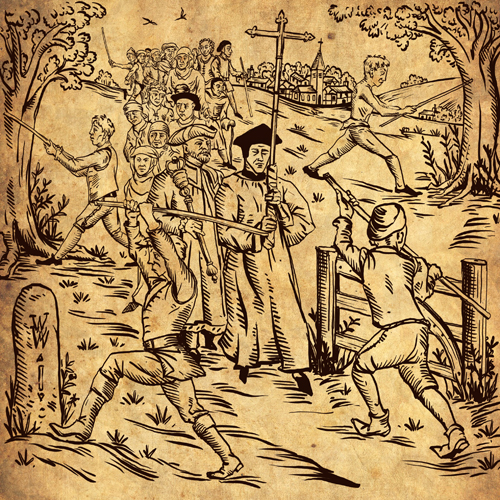 Cate Williams looks at an old tradition that reinforced knowledge of parish boundaries.

Beating the Bounds is a tradition dating back to Anglo-Saxon times. It is thought to have derived from the Roman festival Terminalia, which was celebrated on 22 February in honour of Terminus, the god of boundaries. The purpose of beating the bounds was to share the knowledge of where the parish boundaries lay, and to bless the crops and pray for protection of the parish in the coming year. The ceremony was usually performed during Rogationtide and concluded with a feast, which made it popular with local residents.

The custom involved a group of boys, led by parish clergy and officials, walking around the boundaries of their church parish and beating the boundary markers with sticks. Before the Reformation these annual processions were considered important ceremonial affairs and Lords of the Manor, their bailiffs, reeves and stewards would also attend.

The boys beat the parish boundary markers (usually a gatepost, wall, tree or boundary stone) with boughs of birch or willow, but they were often whipped themselves or bumped on the boundary stones. These thrashings were considered necessary to ‘aid their memory’ and make sure they remembered the exact location of the parish boundaries. The reason for including the younger generation was to ensure that the witnesses to the boundaries survived for a long time.

In the days before maps and written title deeds, beating the bounds played an important practical purpose. Awareness of the parish boundaries was necessary to settle disputes, such as who should contribute to the costs of maintaining the church, and who could be buried in the churchyard. The Poor Laws, which made parishes responsible for caring and providing for their poor residents, were another reason why it was important to know where the parish boundaries lay.

Regularly checking the boundaries was also a way of maintaining their integrity and preventing encroachment by neighbouring parishes; sometimes boundary markers would be mysteriously moved, or lines obscured. For parishes bordered by sea, for example the City of Portsmouth, some of the parish boundaries had to be followed by boat rather than on foot during the beating of the bounds.

Today, parish boundaries have little significance and modern surveying techniques make the ceremony obsolete. Nevertheless, beating the bounds is still lawful, and parish officers have the right to enter private property to carry it out and to use the rates to cover expenses. Some English parishes still perform the ceremony as a way of strengthening the community and giving it a sense of place. For example, in Bodmin in Cornwall, beating the bounds takes place about every five years and concludes with a game of Cornish hurling, and Southwark Cathedral parish in London has recently revived the tradition as an annual event.