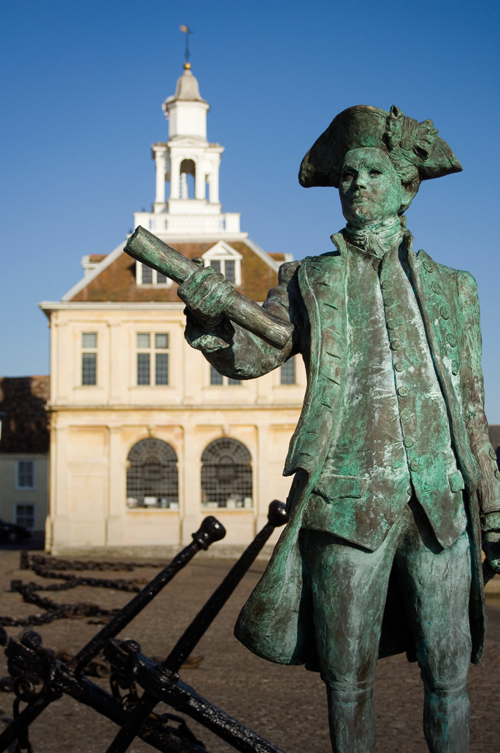 Norfolk is largely thought of, even today, as a rural county – yet the evidence of settlements there dates back to the Lower Palaeolithic period or last Ice Age. The county’s Grimes Graves are a group of some 400 Neolithic flint mines, suggesting considerable human activity in the area by this time. The Iceni tribe lived in the area prior to Roman times and, by around the ninth century AD, the first Norfolk towns had developed.

The main industries of Norfolk have long been fishing and agriculture. The substantial amount of rural land was largely arable, and managed as pasture. Barley was grown to make beer, but other crops were also popular. The county was home to many alehouses, and many people brewed their own beer in the 18th century. By the 19th century, Norwich alone had six large brewery companies in the city, which ran their own pubs. In the days before water treatment, beer was often safer to drink than water, and hence the popularity of beer drinking and production.

Fishing ports existed along the coastline, such as at Cromer and Sheringham, and the local fishermen were famous for their ‘ganseys’ – a navy blue jumper with a distinctive pattern, often knitted for the fishermen by their family members. Whaling was also a popular, although dangerous, occupation in King’s Lynn. However, today, Norfolk’s most famous stretches of water are the Norfolk Broads. These are the result of peat and clay extraction, which originated in the Anglo-Saxon period, but became a large-scale industry during medieval times. This industry was reduced by flooding of the land, and made the fishing and sea-coal importing industries more important to the region. Although efforts to continue peat and clay extraction from the pits continued, they became water-logged and eventually formed the Broads – now a fundamental part of modern Norfolk’s tourism industry.

In the 18th century, economic prosperity led to many of Norfolk’s wealthier inhabitants creating new homes for themselves. One surviving example is Holkham Hall, built on the beautiful north Norfolk coast for Thomas Coke, 1st Earl of Leicester, by architect William Kent. It reflected the wealth of Norfolk families such as the Cokes, its interior including state as well as private rooms. Thomas Coke had made the Grand Tour when young, and had, as a result, an impressive library as well as well as an art and sculpture collection that he intended to put in his new home. However, he lost a lot of money after the South Sea Company collapsed in 1720, which delayed the building of Holkham for several years.

The following century saw industrial growth in Norfolk. A railway line between Great Yarmouth and Norwich was started in April 1843, and opened a year later. In 1845, a further line opened that linked Norwich to London’s Liverpool Street station via Cambridge. These services operated from Thorpe Station in Norwich, but by the end of the decade, some services were using the new Victoria Station. The 1840s saw Norfolk become less isolated geographically, both in terms of the towns within the county, and its distance from London and the trade and commerce of the capital. The railways also created jobs, both in terms of constructing the railways, and operating the trains, ticket booths, signals and stations. In the 1860s, the Great Eastern Railway was created, amalgamating earlier railway companies, and Thorpe Station was rebuilt in the 1880s to meet the increased demands of the railway industry.

Of course, one cannot write about Norfolk without mentioning mustard. Jeremiah Colman initially had a mustard mill in Stoke Holy Cross, around four miles south of Norwich, but his great-nephew Jeremiah James moved it to the city itself in 1858. The factory was successful, broadening the products it produced to include barley water and other goods. It was a model employer, having its own staff canteen, providing housing for many of its employees, schooling for their children, and also establishing sick benefit for workers.

It was not the only successful company in the county, by any means. Boot and shoe making was popular in Norfolk, employing thousands of people by the end of the Victorian era. Norwich was also the centre of a shawl making industry in the 18th and 19th centuries, and Norwich shawls were seen as the height of fashion – many beautifully patterned and ornate shawls survive today in the Carrow House collection in Norwich. However, the Norfolk weaving industry declined during the Victorian era, losing out to competition from Yorkshire and Lancashire mills. There was a county-wide economic depression in the last quarter of the 19th century that led to many of the big houses and estates being broken up, and poorer families seeking parish relief or having to look outside the county for jobs and security.

At the start of the 20th century, the city of Norwich underwent something of a revival, with a tram system being built throughout the old city. Technology made it obsolete within a short period of time, though, with a new bus system replacing the trams in the 1930s. Similarly, in Great Yarmouth, its own tram system only lasted 30 years.

There was also a housing boom prior to World War 2, which saw slum clearances in Norwich and thousands of new houses being built to replace them. Green spaces were also created with new parks. Although the war damaged many buildings in the city, relatively few residents were killed, and the post-war period continued, and continues, to see the reshaping of Norwich.

Find places to visit in Norfolk