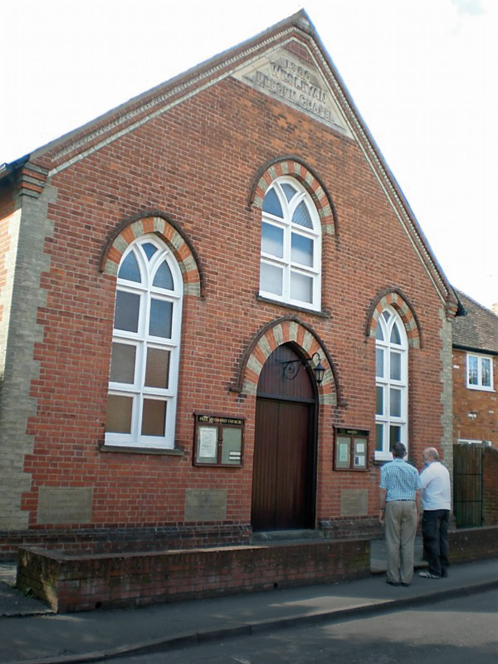 One Buckinghamshire family was proudly nonconformist – despite the impact of war and loss on their lives, writes David Rolfe.

Shepherds Lane in Beaconsfield runs from the centre of the Old Town, down the side of the White Hart pub, to the Amersham Road at the northern end. One hundred metres along on the left is a Free Methodist chapel, and it is where three generations of my family took a leading role.

My great-grandfather, Frederick William Rolfe, was born in 1848, the son of agricultural labourer Joseph and his wife, Mary. At the age of seven, he used to help drive sheep the four miles from Gerrards Cross to Beaconsfield market, shutting gates so they wouldn’t get into people’s gardens. At other times, he helped out his uncle William, who owned Wattleton Farm in Beaconsfield.

But when he grew up, Frederick became a bricklayer. He married Elizabeth Adams of Guilsborough, Northamptonshire, on 10 September 1870 in Beaconsfield parish church, St Mary’s – but none of their children was baptised at St Mary’s, for Frederick became a Free Methodist.

From talking to relatives, such as my late aunt Sybil, I learned that Frederick was a devout, God-fearing man, strong in his opinions, and a man who became a leading member of his nonconformist congregation as a lay preacher. His photograph gives the impression of an Old Testament prophet, and apparently he could give a good fire and brimstone sermon – typical of his day. But he was also a strong family man. Aunt Sybil told me about visiting her grandparents and my unmarried Auntie Lizzie after Sunday school, where they had cakes fresh from the oven. I too have fond memories of Auntie Lizzie, whom we visited when I was young.

Great-grandfather was also a man of principle in politics. Nonconformity and Liberalism were often closely associated, and Frederick was a lifelong Liberal. One of his employers, a Mr Tripp, had different political views and pressured my great-grandfather to change his allegiance. Instead, Frederick changed his job, moved out of his tied cottage, and remained true to his principles.

My grandfather, William Alfred, was the second youngest child of nine. Born in April 1888, he married my grandma, Elsie Mabel Evans, on 3 August 1908 at the Free Methodist chapel in Penn. I still have the family bible that was presented to them on the occasion as a valued family heirloom. Will, as he was known, worked as a house painter in partnership with his younger brother Herbert, known as Bert, who was a joiner. But soon after the birth of my father in May 1914, Britain and Europe were plunged into the Great War. Like many young men, my grandfather volunteered for Kitchener’s Army, serving in the Army Service Corps from December 1915 until October 1918. He was wounded, but I have yet to find out the details.

Like many men who returned from that awful conflict he was a changed person. My father described him as a gloomy man, prone to dark moods. His war wound meant regular visits to the doctor, which upset him – but he was also a devout man. He was the Sunday School superintendent at the Shepherds Lane chapel, and was undoubtedly good with young people; my father told me that he used to mediate when boys got in a fight. His brother and business partner, Uncle Bert, was the choirmaster there.

John Wesley (1703-1791) was an Anglican priest who led an evangelical revival in the Church of England during the 18th century. He toured the country, preaching to ordinary people. He urged reforms in the church, where corruption and idleness were common amongst ministers. Wesley gradually set up his own congregations, and from these, the modern Methodist circuit developed. During his lifetime, Wesley remained in the Anglican church, but after his death, many congregations became independent.

My family belonged to the Wesleyan Reform movement, which split from mainstream Methodism in the 1840s. It holds to a strict interpretation of the Scriptures as the Word of God. My father believed in the Genesis version of Creation to his dying day. Bible study is a very important part of church life. With that goes the responsibility to lead a good, virtuous life. Pre-marital sex is a sin, and drinking alcohol is not approved of – my father was a lifelong teetotaller. Sunday is a day of rest that is strictly adhered to, with obligatory church attendance. As a child, I was not allowed to watch television on Sundays, except perhaps for religious programmes.

The Depression years were hard for my grandfather’s business, and the coming of World War 2 upset him, no doubt bringing back bad memories of his own service in the Great War. He became increasingly depressed, and worried that God didn’t love him. He had also developed Parkinson’s disease. Meanwhile, in November 1942, my great- grandfather Frederick died at the age of 94, having been tended to in his later years by his unmarried daughter, Auntie Lizzie. A few months later, on 28 April 1943, Police Constable Hatfield found the submerged body of my grandfather in the old bathing pool on the London to Oxford road. The coroner recorded a verdict of death by drowning while his mind was disturbed. Years later, a work colleague told me that Parkinson’s disease could be the result of a severe head injury, and depression was often a side effect. Perhaps my grandfather’s war wound had been to the head, and his early death may have, then, made him a delayed casualty of the war.

My father, Donald, had three passions in life – music, medicine and, fortunately for me, my mother. And he had the strong faith passed down through his father and grandfather. Music was his contribution to the local chapel; he was the organist there, a position he held from a young age.

But he was also a bit of a lad. During the habitual long sermons, he sneaked out to wave at one young lady who had taken his fancy. One Sunday, the sermon finished early and he wasn’t at his post. His excuse, when he was found outside, was that he felt ill and went for some fresh air. He met my mother, who was the daughter of his mother’s youngest brother, Harold, at a family Christmas dinner in 1934. For him, it was love at first sight, but my mother, being only 14, just thought he was silly.  He persisted, though, and in the end, my mother gave in. So she came to the chapel to turn the music, while he played the organ. During the sermon, they repaired to the schoolroom at the back to become better acquainted, creeping back in time to play the closing hymn. One day, they thought the sermon had finished early, and clattered up the stairs to the organ in haste, only to find the minister had merely paused for effect.

My parents married on 24 July 1944, and enjoyed 23 years of happy marriage. My father achieved his lifelong ambition of becoming a doctor when he qualified at Sheffield University in 1952, a triumph for someone who had left school at 14. All his life, my father had a strong faith, but he found the ‘fire and brimstone’ sermons of his Free Methodist youth too unsettling. On marrying my mother, he became a member of the evangelical Church of England, a faith they both shared to the end of their lives.

Built in 1688, Jordans Meeting House, just outside Beaconsfield, is the burial place of Quaker William Penn, who founded Pennsylvania. It is a Quaker place of worship to this day (www.jordansquakercentre.org). After Wesley’s visit to Beaconsfield and High Wycombe in 1757, his supporters set up congregations locally. Though High Wycombe was the centre of this activity – with Hannah Ball setting up a Sunday school there in 1769 – a congregation was also formed at nearby Wooburn Green
in 1768. The Beaconsfield Old Congregational Meeting House registers date from 1765. Amongst those recorded in the baptisms was my great-grandfather’s uncle, William Rolfe, in 1788. He was later to become the owner of Wattleton Farm in
the town.

Though the present day chapel has a foundation stone dated 1899, the congregation of Beaconsfield Wesleyan Reform Church (www.thewru.com/locator/high-wycombe-circuit-buckinghamshire/beaconsfieldfreemethodistchurch.php) goes back to 1866. My grandma, Elsie Mabel, worshipped at the Free Methodist Church in Penn, four miles from Beaconsfield, and this is where her parents, Walter and Mary Ann Evans, also played a leading role (www.realchristianity.org). Nonconformism was therefore a strong tradition both in my family and in the community of South Buckinghamshire for many generations.