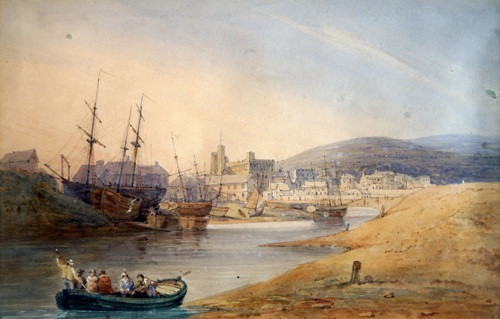 Swansea has often had to fight off negative comparisons to its big brother, Cardiff, which benefits from its status as the Welsh capital city. Even its most famous son, poet and playwright Dylan Thomas, had mixed emotions about his birthplace, describing it as an ‘ugly, lovely town’ and soon moving away to London. In part, Swansea’s image is based on its industrial heritage – in the 18th and 19th century, it was a centre of the copper industry, being nicknamed ‘Copperopolis’. In the earlier part of the 20th century, it saw a period of decline – its famous train stopped running, and the shopping centre remains somewhat neglected and old-fashioned. But now it is seeing a resurgence, and is embracing its history and heritage.

Swansea was founded by the Normans, who built a castle around which the town developed. A town charter was originally granted to the residents in the mid to late 12th century, and a further one granted by King John in 1215. At this point, the population of the town was around 1,000, and still centred around the castle, where a market was held. In medieval times, the primary industries of the town were leather, wool and shipbuilding. Exports have always been part of Swansea’s economy, and even in medieval times, exports of leather, wool and food, such as butter and cheese, were a key part of the town’s prosperity.

In Elizabethan times, a riverside quay was built in Swansea, but in Regency times, Swansea tried to establish itself as a fashionable seaside resort, wanting to attract affluent and genteel visitors in to spend money there. Its heyday as a resort was brief, spanning only half a century between 1780 and 1830. Boarding houses and hotels sprang up to cater for these visitors, who would sea-bathe and visit the theatres and assembly rooms. But Swansea decided that industry was more important than tourism, deciding to open a new dock – South Dock – in 1859, in what had been the genteel heart of the town. It took until the 20th century for tourism to be encouraged again, coinciding with industrial decline in the city.

It was the copper industry, rather than seaside tourists, that made Swansea’s fortunes. It was already home to coal mining, lead and zinc, but the first copper works, at Landore, were built in 1717, with the White Rock copper works following 20 years later (see tinyurl.com/hdhpswy). White Rock was established by Cornishman Robert Hoblyn and operated by his father-in-law Thomas Coster MP’s company; the Costers, from Bristol, were also involved in the slave trade, and saw copper as a part of this trade. Copper was used for cooking and industrial goods, being easy to work. Copper was imported from other areas, including Cornwall, until the turn of the 19th century, when the city received imports from further afield, including South America. The peak of the local industry was in the 1880s, when around 3,000 men were employed at any time in the local works. Several smelting works, such as the White Rock works, were built alongside the river Tawe, with ships sailing up to them to bring in cargo. Tinplate manufacture also took place in Landore from the 1870s, and this led to the expansion of the city’s port. The Prince of Wales Dock opened in 1882, and was used primarily for the export of tinplate – America was a key destination for these exports. These industries continued until World War 2, when they went into steep decline; however, the rot had started earlier, with the White Rock works closing in the 1920s.

Transport has long been a key part of Swansea’s fortunes – from the 19th century rail industry, to the maritime industry based around its semi-circular bay. But in the 19th and 20th centuries, it was also famous for the Mumbles Train.

Officially known as the Oystermouth Railway, and then the Swansea and Mumbles Railway, this was the world’s first passenger railway service. It was an 1804 Act of Parliament that allowed it to be constructed – the original aim being to build a railway that could transport coal, iron ore and limestone from the Mumbles quarries to the city and beyond. It opened in 1806, but on 25 March 1807, the first fare-paying passengers were taken on the train, paying £20 a year for the privilege. The train was originally powered by horses; in1877, it became steam-powered, although some horses continued to be used until 1896. In 1904, Edward VII and his wife, Queen Alexandra, travelled on the train – as did George V in 1920. In the 1920s, the Mumbles Train became an electric tram system, but when buses became popular, the train’s days were numbered, and the last journey was made on 5 January 1960 (this last journey can be viewed at (player.bf.org.uk/film/watch-mumbles-railway-1804-1960-last-journey-1960/). One Mumbles Train car can still be seen in the Tram Shed next to the National Waterfront Museum, and there are other reminders of its existence in the city, from the remains of old tracks by the museum, to The Slip – once a bridge over the train tracks, and a stop on the route, but now a couple of stone abutments that supported the iron bridge itself (which was taken down for safety reasons over ten years ago, and has never been replaced).

Swansea residents have long enjoyed theatrical diversions. 18th century actress Sarah Siddons’ sister Ann Julia Kemble (1764–1838), lived in the city, and became known as Anne of Swansea. She and her husband William Hatton had leased the Swansea Bathing House from 1799; when he died in 1806, she moved to Kidwelly to run a dancing school, but returned to Swansea to write in 1809, financially supported by her famous sister. In the 19th century, the city became associated with Spanish-born opera singer Adelina Patti (1843–1919), who lived at Craig-y-Nos Castle, between Swansea and Brecon (craigynoscastle.com). She built a pavilion on her estate, and in 1918 gifted it to the city. It was relocated to the Mumbles Road, where it still stands as a performing arts venue, and is known as the Patti Pavilion (www.pattipavilion.co.uk).

More recently, of course, Swansea has become inextricably linked to its enfant terrible, Dylan Thomas, who was born at 5 Cwmdonkin Drive in 1914, and attended Swansea Grammar School, where his father was an English master. He is commemorated today in the Dylan Thomas Theatre, located in the maritime quarter (www.dylanthomastheatre.org.uk). His famous quote about his home town recognised its beautiful location, stating that the town was “crawling, sprawling…by the side of a long and splendid curving shore. This sea-town was my world.”

Today, Swansea is starting to throw off its ‘ugly’ title, and showing off a bit more about its location and its charms. One of those has to still be the curving shore it hugs, where the city’s past as the heart of a maritime industry can still be pictured and imagined.

History and heritage in Swansea