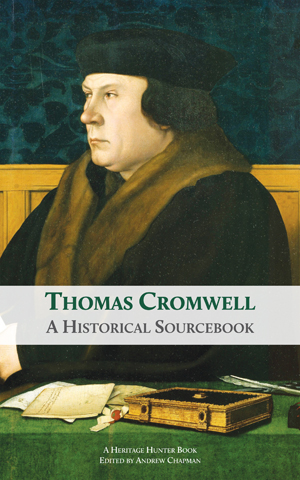 “The perfect companion to Hilary Mantel’s trilogy of Wolf Hall, Bring up the Bodies and The Mirror and the Light, and the biographies of Thomas Cromwell by Diarmaid MacCulloch and Tracy Borman.” – Discover Your Ancestors magazine

Interest in the 16th century British statesman Thomas Cromwell, right-hand man to Henry VIII until he lost favour with the king, has never been greater than in the last decade, fuelled by award-winning novels and biographies. But until now there has not been a single sourcebook bringing together most of the contemporary or near-contemporary accounts of Thomas Cromwell’s life and deeds which those writers have drawn upon.

This book redresses the balance with an edited collection of letters, chronicles and memoirs from people who knew Cromwell directly – including Cromwell himself – as well as those who wrote about him in his era. Writers here include Reginald Pole, John Foxe, Raphael Holinshed, George Cavendish and John Stow, as well as numerous others.

This book is a useful tool for all students of 16th century British history, as well as anyone captivated by the life of this enigmatic figure.